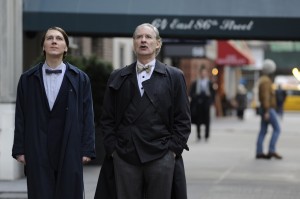 Based on the novel by Jonathan Ames, ‘The Extra Man’ tells the story of a failed playwright, Henry (Kevin Kline) who becomes a mentor to a troubled and aspiring playwright Louis (Paul Dano). The unusual circumstance of this relationship begins when Louis sublets a room in his apartment to Henry.

Henry teaches Louis the art of being an ‘Extra Man,’ accompanying and entertaining wealthy older women in their lives.

From the married team of American Splendor, Shari Springer Berman and Robert Pulcini adapted the screenplay with assistance of its writer. The directors told the audience at its premiere at Sundance that they sought out Kline, but were concerned whether or not they could land him. From what I’ve read about the film, Kline owns the part, and was eager to take it on.

Boston audiences should be excited, because not only do they get to see ‘The Extra Man’ before its full theatrical run, but Kevin Kline and directors Berman and Pulcini will be in attendance at the screening. Also, Mr. Kline will be accepting the IFFBoston 2010 Career Achievement Award.

To purchase tickets for this opening night screening, as well as other screenings at IFFBoston, click here.

One thought on “IFFBoston 2010 Spotlight: The Extra Man”