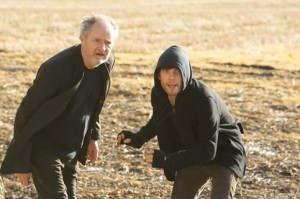 The film opens with Michael McCrea (Cillian Murphy) passed out on a coach, and an ominous narrator (Gabriel Byrne) setting the scene for us. We find out immediately that Michael owes a powerful gangster named Perrier (Brendan Gleeson) a large amount of money, and he owes it to them by the end of the day.

As if Michael’s day doesn’t get bad enough, but the girl who he’s madly in love with (Jodie Whittaker) is having problems with her boyfriend (whose cheating on her), and his estranged father (Jim Broadbent) shows up to inform Michael that he’s dying.

The film is dark, gloomy, no shots of the beautiful rolling cliffs of Ireland here. The film takes place in the darker gritty side of Dublin. It’s shot mostly handheld, and its film stock grainy and “constrasty.” It’s cut sharply, but far from the over stylized films that tend to make the genre.

Cillian Murphy is great, he’s an actor that has made great choices in his years. He continues to move from great indie films to quality studio films. A talented actor, he could fully “sell-out” and move straight to the mainstream, but its clear its the smaller, character driven films that speak to him as an actor.

What’s great about ‘Perrier’s Bounty,’ is that it offsets the violence with dark humor, and that works for the film. It’s genuinely funny, and despite the dire circumstances that our main protagonists are in, its brought to us with a dollop of humor.

I ran into some slight problems in the third act, it just jumps right into the finale. But, despite these few small issues in its balance, I still enjoyed it.

Perrier’s Bounty was a fun, entertaining movie, and I really hope this film gets wider distribution so more people get to check it out.