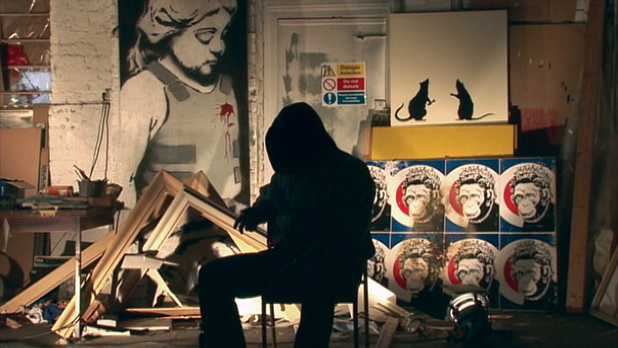 Is it a joke?  Is it real street art made by an important new artist?  Either way, “Exit Through the Gift Shop,’ the new documentary by artist Banksy is damn interesting.

“Gift Shop” tells the story of Thierry Guetta a French-born, LA-based clothing boutique owner.  Years ago, Thierry became obsessed with video cameras.  He started documenting everything in his life.  Not just his children growing up, but him showering, him at parties, etc..  Thierry suggests at one point that his obsession with preserving things comes from his childhood, where his mother died suddenly, leaving him with nothing buy memories and a few fuzzy photos.  Thierry takes a vacation and goes back to France, where he meets up with his cousin, an artist who makes small mosaics that resemble characters from the video game Space Invaders.  Taking the game’s name as his own, Invader starts to install his artwork all over the city of Paris and then the rest of the world.  Thierry follows along, camera in-tow, as he captures the birth of an artist.

Back in LA, he meets up with Shepard Fairey, who is installing his Andre the Giant “Obey” posters all over the place.  Thierry follows Fairey too, filming him making his artwork and hanging it.  At some point, someone asks the question, ‘who is this guy filming and why is he doing it?’  Thierry comes up with the only reasonable answer he can think of- he’s making a movie.

This answer seems to make sense to the artists, and they let him continue filming.  The one artist that Thierry is unable to film is British artist Banksy.  Then one day, a phone call from Shepard Fairey drops Banksy in Thierry’s lap.  The two hit it off and pretty soon, Thierry is filming Banksy’s work.  However, when he sits down to edit the movie he’s been talking about, he doesn’t know how to do it.  He produces a cut, which Banksy thinks is terrible.  Taking control of the footage in London, Banksy sends Thierry back to LA, with a suggestion that perhaps he should start making his own street art.  Thierry takes on the name Mister Brainwash.  An art exhibit is planned…

“Exit Through the Gift Shop” is fascinating because, well, is any of it real?  Is Mister Brainwash really Thierry or is he another character created by Banksy?  Is he popping the balloon of people paying millions for street art by creating bad art and making people pay for it?  Or is it what it claims to be?

No matter what it is and whether you watch it as a straight documentary about a fascinating new art form, or if you pore over it looking or clues as to the identities and motives of the players, “Exit Through the Gift Shop” is something to behold.  Interesting, thought provoking and very amusing, it’s a different kind of documentary.

If you have any interest in the form of documentary film, the movie is full of questions that you’ll want to spend time pondering afterwards.  Quite simply one of the best movies of the summer season thus far: check out “Exit Through the Gift Shop.”  -Sam