Skip to content
home Front Page, Movies, Reviews Review: Get Him to the Greek 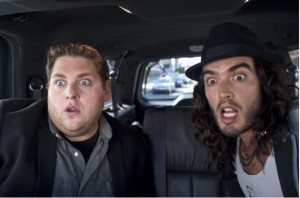 ‘Get Him to the Greek’ is the latest from writer/director Nicholas Stoller, and a spin-off of his previous film, the excellent ‘Forgetting Sarah Marshall.’ In this film, Russell Brand reprises his role of Aldous Snow, the controversial rocker, and is joined by Jonah Hill, who in this outing plays a new role, Aaron Green, a low-level rep at the fictional Pinnacle Records.

The film opens with Aldous in the music video for his single ‘African Child,’ a song that is later panned within the film as the ‘worst thing to happen to Africa since apartheid.’ Though years spent sober, the critical hit ruins his career, and Aldous fades away into the background.

Coming upon the 10 year anniversary of Aldous Snow’s infamous Greek Theater performance, Aaron Green pitches to his boss & head of Pinnacle, Sergio (Sean Combs), an anniversary concert. They can presell the rights to cable, online, and possible bring back his career. Sergio sends Aaron to London to retrieve Aldous, and bring him back to the States to promote the concert, and finally, to his performance.

Of course, this is no easy task, for at every turn, Aaron has to put up with Aldous’ ridiculous antics and requests. Whether its fetching heroin in Vegas, or delaying his flights so he can party. The film is filled with ridiculous, crude, and ultimately very funny situations.

Hill and Brand have great chemistry, as it was evidenced in the previous film, so it isn’t a wonder how ‘Get Him to the Greek’ came about. ‘Greek,’ is entertaining, and, for some reason, probably not as outrageous as it might seem. The character Brand plays despite the absurdities, actually feels like a real person.

The movie is pure fun, though, there are times were the pace is slowed down for some sequences that offer very little end results, it still moves pretty fast. The supporting characters here are great, save for Combs, who completely lacks the comic timing and talent of his costars, every line of his feels forced (see the preview for the line “You know how many air jordans six black kids wear?”). But other then these minor weak moments, the movie is fun.

Will ‘Get Him to the Greek,’ please everyone? No. If you aren’t a fan of Jonah Hill or Russell Brand, it’s likely that ‘Greek,’ will irritate the hell out of you. But if you are a fan of these guys, and you liked ‘Sarah Marshall,’ this may be worth checking out.