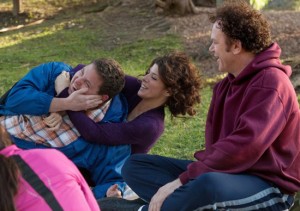 ‘Cyrus’ is the latest film from The Duplass Brothers, one of the groups behind an indie film movement called mumblecore. If you’re not familiar with the genre, its basically ultra-low budget films that foucs on relationships, using improvised scripts, and non-professioanl actors.

Working up the ladder with films like ‘The Puffy Chair’ (which played at IFFBoston a few years back), Cyrus represents the brothers first major studio effort. The film stars John C. Reilly, Marisa Tomei, Jonah Hill, and Catherine Keener, and is produced by Scott Free Productions (Ridley & Tony Scott’s company), and being released by Fox Searchlight.

John (John C. Reilly) has been divorced from his wife Jamie (Catherine Keener) for 7 years, a moment in his life where he clearly carries a great deal of regret. However, Jamie has remained in John’s life ever since, as John is clearly an individual who needs some sort of direction in his life. However, Jamie’s about to remarry, and knows that she needs to do something to get another female figure in John’s life. On his urging, John goes with Jamie and her soon-to-be husband to a party, where he meets Molly (Marisa Tomei), who quickly is realized as the girl of his dreams.

But something is up with Molly, she sneaks out early in the morning (or late at night). She also doesn’t seem to really want John coming back to her house. So on a whim, John follows Molly home one evening. In the morning, he goes to investigate what exactly is going on, that’s when he meets Cyrus (Jonah Hill).

Home-schooled, and clearly a bit overprotective oh his mother and his interets, Cyrus is welcoming of John, almost too welcoming. But it is clear to John that Cyrus has other intentions.

The film is shot mostly handheld, and we are made very aware of the camera, with quick zooms in, and occasionally erratic camera movement. However, the film isn’t completely a psuedo-documentary (the characters never acknowledge the camera a la ‘The Office’), but you definitely know that you are the camera. As someone who isn’t as versed in the mumblecore style as others, I find this artistic decision a bit interesting, because most of the time, I didn’t feel like the quick zoom-in really did anything for the audience most of the time. There were a few occasions here and there where a zoom-in highlighted a character realizing something, finding something, or holding something, but I’d say most of the time, I didn’t really understand the motivation.

I’m not certain how much of the film was improvised and how much was scripted, but the dialogue was very natural. Of course, when you’ve got a talented cast like this film, that never was a fear. John C. Reilly is someone who I feel has always been great as a supporting character. His turn in ‘Walk Hard,’ was good, but I didn’t completely love it. He definitely carried the film extremely well, we’re with him pretty much the entire way through and he excelled.

Marisa Tomei is also excellent as Molly, I’m so glad to see her popping up in so many different films. She’s a great actress, and I loved her in her role. Her relationship with Jonah Hills character could have been even stranger and creepier then it was, but they both played it perfectly.

At the end of the day ‘Cyrus’ could have been just another cookie cutter situational comedy. But the style choices by the directors, and the improvisations by the actors definitely give this movie a unique feel. At its core, Cyrus is a very sweet film, and you will be laughing all the way through to the final reel.