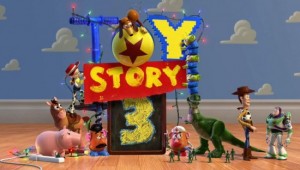 I’ve always said, if you see a Pixar film and at one point don’t even get slightly misty eyed, you have no soul. The latest film from the powerhouse of a production company is no exception. Toy Story 3 does not break the rhythm. It is a funny, yet emotional film that is relatable by all young and old.

The film takes place as their owner, Andy has grown up, and getting ready to leave for college. Much of their counterparts have been donated and sold off, and every day the toys fear that they soon will end up on the curb, abandoned. At the urging of his Mother, Andy is told to take care of all his things before he moves to college. He decides to take Woody with him to school, and the rest of the gang is bagged up for storage in the attic.

In a complete mistake, the toys are sent off in a donation box to a daycare, and Woody sneaks off to try to save his friends. When they arrive at Sunnyside, they are greeted to what first seems like paradise, where the children never age, and the toys are always played with. When in reality, the daycare is a horrible place for toys, where the children tear, throw, draw, and eat their toys.

The film then turns into the great escape, where the toys fight to escape this daycare prison, and return to their owner Andy.

As the other films, the themes at work here are abandonment, usefulness, replacement, and being there for their owner. As the toys struggle with feeling useless, we witness the beginning of a new owner for the toys, which tears right at the heart!

The film features some very intense action, something that freaked me out let alone a young kid, so be weary, but it is a great film with a great message. This like other Pixar films does not disappoint, and the studio proves yet again that they continue to have the golden touch.

One thought on “Review: Toy Story 3”