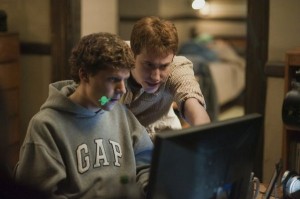 Films about recent “history” are tricky. Films like ‘United 93,’ ‘W,’ etc. are met with questions like, why? or statements like, “too soon.” There were all concerns in my mind when I first heard about this Fincher/Sorkin project. So many questions. Why a movie about Facebook? Why a movie about Mark Zuckerberg? When the trailer came out, I said, all right, I’m intrigued, but, still, how can there be this much drama in this story.

Before I continue this review, I’d like to say one thing. A few times in the past few years on this site, I’ve opened a review up with the statement, don’t read this review, just go see the film. This is one of those instances. With that out of the way….

The film opens with Mark Zuckerberg (played by the talented Jesse Eisenberg) a sophomore at Harvard University, on a date with Erica Albright a Boston University student. Things take a turn for the worse, as Mark destroys any shot he had with his over-intelligence and insulting tone. Erica tells Mark flat out, that she has no interest in ever speaking with him again. Upset, and to the tune of the amazing Trent Reznor/Atticus Ross score, Mark leaves the bar and heads back to his dorm.

Drinking heavily, he programs a hack that steals pictures from the various houses on the Harvard network, and creates a site called facemash.com. With the help of his friend Eduardo (Andrew Garfield) and his algorithm, Mark programs the site, which is an instant hit, crashing the entire Harvard network.

The film tells the story through two legal proceedings, one is between Mark and Eduardo. The second, between Mark, Cameron & Tyler Winklevoss, who we learn hired Mark to help them with a site called HarvardConnection (later becomes ConnectU).

Following academic probation, Mark is invited by Cameron and Tyler to meet with their business partner Divya Narendra to discuss them hiring Mark to design an exclusive website for them. Mark takes this idea, and essentially makes it his own, programming his entire site, thefacebook.com, from scratch. Though original in programming, certainly inspired by the idea from Cameron & Tyler, only much better.

The film excels at painting Zuckerberg as a confused yet calculated individual. Inspired by his lack of social acceptance, he creates Facebook, while destroying what few personal relationships he has. He’s rejected, not accepted to any of the exclusive Harvard clubs, and his response is to create his own. His relationship with Eduardo is portrayed so well, and Garfield (slated to be the next Peter Parker/Spider Man) plays the characters emotions so well, his jealousy of Mark’s relationship with Sean Parker (Justin Timberlake), a Napster cofounder, and his reaction to a pivotal moment at the end of the film, is flat out amazing.

The direction here by Fincher is magnificent. ‘The Social Network’ was shot entirely on the Red camera, completely digital. The imagery and mood is amazing. A few scenes in particular truly stood out from the rest. There is a scene where the Winklevoss brothers were competing in a crew race in England. With Trent Reznors version of “In the Hall of the Mountain King,’ the scene is extremely memorable. In another great scene, Mark and Sean Parker (played well by Justin Timberlake), a founder of Napster, are meeting in a loud San Francisco club. In most films, two characters talking at a club, you can hear everything clear as day. In this scene, the two characters are yelling loudly to speak to each other, and are still drowned out by the heavy club music in the background. As a member of the audience, you feel like you are in the third seat, trying desperately to hear clearly everything their saying. Subtle, but I liked the choice a lot.

Sorkin’s script is so tight, his dialogue so punchy and fast, it is an absolute wonder to me why more movies these days don’t say “Written by Aaron Sorkin,” because they should.

Last, but certainly not least, the score. I’ve haven’t heard this remarkable, and memorable a score in years. It fits the film so perfectly. It’s haunting, fitting, and amazing.

Whether or not a single frame of ‘The Social Network,’ is true, I’m not sure. But, ‘The Social Network’ will be the definitive history of the founding of Facebook wether they like it or not, and at the end of the day, it’s a great freakin’ movie too.