Skip to content
home Feature, Front Page, Movies Looking Back: Back to the Future 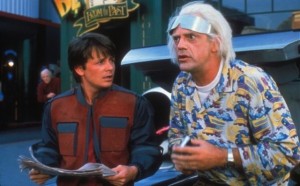 Though my childhood consisted of treasure hunting, bull-whip toting aspirations, so did time travel via a Delorean, thanks to Back to the Future. Twenty-five years since the first Back to the Future, the series stands up as a timeless film, and the series has recently been remastered and released on Blu-ray (as well as re-released to DVD). October 26, 2010 (the day of release) marks 25 years after Marty McFly hopped into Doc Brown’s Delorean, and inadvertently traveled to 1955. Which in turn started a chain reaction unwittingly jeopardizing his very existence. Obviously, this wasn’t a cosmic coincidence, but a subtle marketing ploy, for a film that is riddled with subtle details.

Some of my favorite examples of this detail:

Within the first few minutes, we hear about Statler Toyota – which happens to be the folks selling Marty’s dream car, which also happens to be around not only in the 1950s, but in the Wild West as well!

The detail when Marty comes back to 1955 in the second film, tiptoeing around is past self!

Mayor Red Thomas who wants to get rid of drunk drivers in 1955, is the homeless bum who exclaims “Crazy drunk drivers”

Another favorite piece of Back to the Future trivia for me is the idea that at one point, the time travel machine was actually a refrigerator. But the Producers felt that they didn’t want to hear horror stories of children becoming trapped in their parents fridges. How right they were. How many of us have drooled at the idea of owning our own Delorean? Imagine if we drooled at owning the fridge they used? To this day I love lurking on eBay and seeing what their going for.

I love and have loved Back to the Future because it played to my fantasies. Being able to hop in a car and travel through time is a universal fantasy. Who doesn’t want to see what the future holds? Or, learn more about the past by going in reverse? The adventures we’d have, the people we’d meet, the things we’d learn. Back to the Future is loved by all because of this shared daydream (in addition to its brilliantly entertaining cast, direction, and production design).

Happy 25 years Back to the Future, though in 5 years we probably won’t have flying cars or hovorboards, but I still love you just the same. Time to go watch the special features.