Skip to content
home Editorial, Front Page, Movies Let Me In…As To the Whys of This Remake 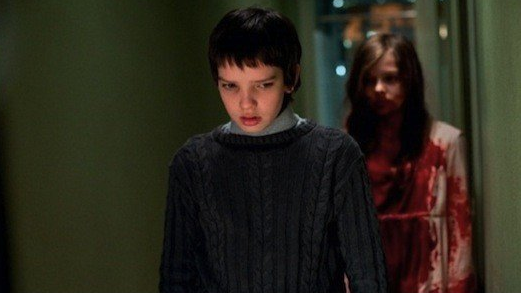 You’ll have to forgive me ahead of time, as this write-up may turn out to be just a mental meandering as I try to come up with a rationale for why what I just watched exists.  It’s hard to find a flaw with Matt Reeves’ 2010 film, Let Me In.  It’s beautifully shot, the atmosphere and mood is dense and lingering, and the acting from principles Kodi Smit-McPhee and Chloe Grace Moretz are expectedly spot on (their respective work in The Road and Kick-Ass solidified their ability to bring character and nuance to a role [well, I suppose as much nuance as one could be expected to bring to a character like Hit-Girl]).  All of the pieces are there and they all work well.  In fact, this is an excellent film and one that I wouldn’t hesitate to recommend if someone asked.  So what’s the problem?  The problem for me is: what’s the point?  That’s the question I’ve been mulling over since I took the DVD out of my player.  You see, this is film was already made back in 2008.

Let Me In is a remake of the Swedish film Let the Right One In (which, in turn, was an adaptation of the book of the same name), and best as I can tell, it’s almost exactly the same in most respects, from mood, to set design, to dialogue, to shots, even down to haircuts.  Reeves has exorcised a few key scenes from the Swedish film; first (and mercifully) that dreadfully silly cat scene (a scene that, for me, completely disrupted the somber, heavy mood of the film) and second, the scene where Eli (renamed Abby in the American remake) reveals her/his mutilated genital area, which was a quick scene, but kind of an important one as it visually drove home the questionable androgyny of the vampire and helped put in perspective the relationship that was forming between Eli/Abby and Oskar/Owen.  Is it sexual?  Can it be sexual?  In the context of the bullying that Owen goes through in the film (and it’s pretty brutal), the relationship could be expressive of a budding homosexuality and the stigma attached to that.  All of this was expressed very well in that quick shot of Eli as s/he puts on a gown and we see the scar of what used to there.  It was impressive and important, and given the nature of this remake, it was interesting that it wasn’t there (although, given our seemingly random puritanical tendencies, I wouldn’t be at all surprised that the decision to not put that shot in there wasn’t Reeves’ decision).  But these differences aside, the only thing that really, truly separates the Swedish film from the American remake is the fact that the film is in English.  Which brings me back to why?

This isn’t the first time a film has been remade with such specific precision.  In fact, the film that came to mind as I finished watching Let Me In was Michael Haneke’s Funny Games.  Funny Games was originally an Austrian film that Haneke remade in English in 2008.  A shot-for-shot remake of his original film, the only real purpose that came across as to why Haneke devoted his energy was to bring the film to an audience that it may not have reached before, due to language barriers.  Subtitles aren’t for everyone, and for those who prefer not to read while absorbing a film, a remake in an audience’s native language does allow for a film to reach a wider audience.  In the case of Haneke, he was retelling his own story and seems to want to share the film with the English-speaking world (or, I suppose, in the specific case of Funny Games, criticize Americans for their horror movie-driven lust for blood [but I digress]).  Reeves sort of seems to want to do this with Tomas Alfredson’s film, in the way that a musician may cover a smaller band’s phenomenal song, introducing an audience to music they may have never had a chance to hear of, which would explain the shot-for-shot-ness of the whole remake.  But where I get lost is that a) I don’t think Let the Right One In missed much of the audience that Let Me In would be aimed at (specifically, the vampire genre-loving folks) and b) Reeves seems to have set out to make his own film, based on the fact that he’s listing himself as the writer and director of this film, which I guess in the literal sense is factual (this is also based on the Making-Of bonus feature on the disc where Reeves distinctly notes that he is adapting the book, not the film).  If Reeves’ goal was like Haneke’s, bringing a story to an audience that it may not have reached otherwise, he might have put too much of himself into the film to actively support this as the case for the remake.  And if his goal was to put his version of the book out on film, Let Me In is so alarmingly close to Let the Right One In that this argument is almost completely invalidated.  Which, again, brings me back to: so why?

In a vacuum, were you to stumble across either Let the Right One In or Let Me In, you would not be lesser off for seeing one over the other.  Ignoring that the other exists, each film is beautiful, well crafted, and an excellent story (and excellent storytelling).  But given that they both exist, and that language is really the biggest difference between the two films, it left me lingering with the question I started with (and ended almost every paragraph of this discussion with): why?  This film experience is sort of like hearing a great story about a friend, then retelling it as if it’s your own story.  Sure, the story is great and there’s something to gain from retelling to others, but it just feels sort of, I don’t know, disingenuous in claiming it as your own.  Let Me In is a great story; I’m just not sure I understand if it’s Reeves’ story or Alfredson’s.