It’s vulgar, its hilarious, it’s…the new film from the director of Pineapple Express, “Your Highness.” Reuniting with some of his cast from “Pineapple,” the film features James Franco, and Danny McBride, the latter being my favorite part of that film.

Created in the spirit of fantasy films like ‘Willow,’ or ‘Lord of the Rings,’ ‘Your Highness,’ doesn’t outright spoof any of them, but rather creates its own kingdom, it’s jokes however, are tailored for a modern audience. Though much of the characters choice of language is to the “period,” (I use this term loosely) I don’t think they’d say “handle your shit,” back in the day.

The film tells the story of brothers Fabious (James Franco) and Thadeous (Danny McBride), who set out on a quest to save Fabious’ new bride Belladonna (Zooey Deschanel) from the clutches of the evil warlock Leezar (Justin Theroux). Leezar is looking to take Belladonna’s virginity as the two moons come together, where the virgin he takes will bear a dragon that he will control.

The hijinks begin, as Thadeous, whose lived a relaxed life of luxury in the shadow of his brother, is sent along on the quest. Thadeous is accompanied by his squire, Courtney (Rasmus Hardiker). His role, although minor, compliments that of McBride’s spoiled prince. The story for all intents and purposes is your classic fish out of water tale.

Natalie Portman, who no doubt signed for this film far before her Oscar winning performance in Black Swan, kicks some serious ass in the film. I was also happy to see Damian Lewis (Band of Brothers), an actor I really enjoy and want to see far more of.

‘Your Highness,’ story arc is achingly predictable. Like I mentioned earlier, Thadeous is your classic fish out of water, who overcomes the odds, and changes for the better. But, did you really come here for the character development? 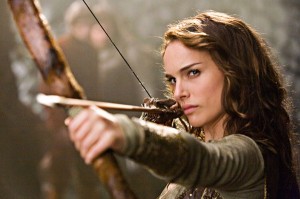 The film had some impressive locations, from my understanding, mostly in Northern Ireland. Another notable observations is the films use of puppets and creature costumes in lieu of CGI characters.’Pineapple Express,’ was hurt by poor pacing, the pacing here was much faster. Surprisingly, there were some fairly exciting and well executed action sequences.

Is the film offensively vulgar? Yes. Very much so. Many are dismissing it for this fact. But, is it entertaining? If vulgar humor entertains you, then yes, it is extremely entertaining. Films like this have a very specific audience, and those people are going to see this film. If the red band trailer didn’t interest you, the film isn’t for you. If you don’t find Danny McBride funny, then the film film isn’t for you. If you answered yes to those questions, get your ticket, buy a big tub of popcorn, and have some fun…your highness.