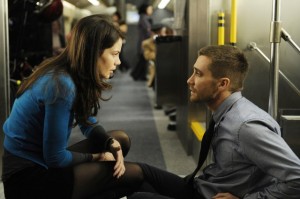 ‘Source Code’ is Duncan Jones’ follow up to his critically acclaimed feature debut ‘Moon.’ Starring Jake Gyllenhaal, Michelle Monaghan, and Vera Farmiga – ‘Source Code’ is enjoyable as it is complex, Jones along with screenwriter Ben Ripley have tailored a great movie.

The film begins with Captain Colter Stevens (Gyllenhaal) essentially being placed (somehow…a plot point that cannot be explained without major spoilers) in the middle of a situation that has already occurred – the bombing of a commuter train. His mission, is to investigate the scene, find the location of the bomb, and hopefully, the bomber.

He is put through the simulation, over, and over, and over again – each time getting to know more about Christina, (Monaghan) the woman sitting across from him. Each pass can only have him in the world for 8 minutes, and each turn has him get closer to Christina, and to finding the perpetuator. Trial and error, trial and error.

To compare the film to Groundhog Day is to do the film injustice. Yes, you as the audience along with its main character repeat the same moments over and over again, but that is where the comparisons end. Through Jones’ careful, yet unyielding story telling, we are kept on the edge of our seat through to the end. The films pace never lets go, and it ends just as quickly as it starts.

The concept is great, and is executed with perfection, with twists and turns that I couldn’t see coming. Though I can’t say this about every plot point, the major reveals were quite gratifying. Simple, short, high concept, well shot, cut, and acted. ‘Source Code,’ is an exciting and satisfying sci-fi adventure, check this film out.