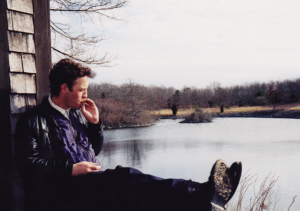 ‘Cure for Pain: The Mark Sandman Story,’ is a memorial to Mark Sandman, the frontman of Boston based band ‘Morphine.’ The filmmakers were given complete access to the Sandman family’s archives, as well as to the band’s friends and family.

‘Morphine,’ began in Cambridge, MA, and was made up of Mark Sandman, Dana Colley, and Billy Conway. The band had an extremely unique sound, Sandman primarily playing a 2-string slide bass, Colley on sax, and Conway on drums. The film is wall-to-wall sound. I can barely recall a moment during the film without music, I believe in the Q & A it was stated that there were a total of 96 tracks used in the film.

Sandman was notorious for his privacy. Very little is known about him other than the information that is readily available. His television, radio, and print interviews were approached with very little seriousness (examples of this are throughout the film), and despite being a documentary about Sandman, I feel that ‘Cure for Pain,’ barely scratches the surface of his persona.

They do highlight some of the moments in Sandman’s life that clearly influenced his music and who he was. From his journey’s across the world, to the tragic deaths of his brothers.The film offers wonderful interviews with Mark’s parents, who talk candidly about those deaths, which occurred within a short time of each other.

While the title of the film suggests that the band was a cure for the pain that Mark felt throughout his life, I don’t feel like they explore this theme as much as they could have.

The film succeeds as being a technically sound, well edited piece memorializing Mark, and celebrating his life and talent. He lived a great life, and his unique music touched a lot of people. However, the film ended with me feeling like there is much about Sandman that perhaps we will never know.