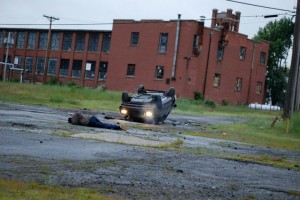 Mickey (played by writer Louis Crugnali) steps out of a crashed car, his head bloodied, he heads towards a body that has been thrown from the vehicle. Getting down on his knees, he sees that his childhood best friend is most certainly dead.

‘The Mulberry Tree’ tells the story of Mickey, who is on the last month of his parole, and how the accidental death of his best friend still haunts his life. His father Michael is a prison guard, at times a belligerent drunk, and it is clear the two don’t get along. Working at a hospital for his court ordered community service, Mickey becomes interested in a patient at the hospital. Sam (Joe Morton, The Good Wife, Terminator 2), dying of AIDS, is actually an inmate whose is there to die.

Sam’s daughter, Maria (Daniella Alonso), also lives in the area, and unbeknownst to Sam, comes into the hospital to check on him. Maria eventually follows and approaches Mickey, because of his access to the father she barely knows.

Taking a creative writing class at the local community college, Mickey is assigned a project to write about someone he doesn’t know, but would like to know more about. Mickey sees this as an opportunity to explore this curious inmate at the hospital. We learn that Sam is a former junkie, and during his time in prison, killed a guard that was Michael’s friend. Michael is transferred to the hospital by his superior, clearly with this conflict of interest in mind.

The film is filled with characters hiding crucial pieces of information from each other. Maria doesn’t initially reveal that Sam is her father, Mickey doesn’t talk to his father about his relationship with Sam, and Michael never reveals to anyone his motivation for wanting to watch over Sam. I was waiting for the consequences of hiding these things from each other, but it never ended up happening. Michael has an angry hatred towards Sam, wouldn’t the the revelation of Mickey being nice to this person be cause for conflict?

‘Mulberry’ has as an extremely large cast of characters, who all relate and connect in one way or another. Keeping a film together with this many intersecting plot points is complicated, and director Mark Heller does a good job at it. However, this also is the reason for some of the films weaknesses.

The different relationships were great, but I couldn’t help feeling like something was missing. So much going on, that we never really got to linger and process any of the most meaningful moments of the film. The film was in such a hurry to give us all this information, but it never went far enough into it.

There were so many opportunities for intense detail into the guilt that Mickey felt, the complicated relationship between Mickey and Michael. It tried, but when it did, the groundwork wasn’t there. The foundation that they laid wasn’t allowed to completely dry.

That said, I did enjoy the film, I think that Crugnali had a great emotional script, and Heller did a great job with the material. All the performances were strong, especially the main cast. I think the filmmakers are talent to watch, I just wanted things with this film to be a little bit tighter.