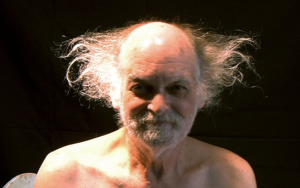 Joe Davis is a genius (most likely to the hindrance and detriment to what a lot of us would considered a quality life [though the whole eye-of-the-beholder thing probably applies, so I will concede that he may enjoy his life a lot more fully than I  ever will, though I am a fairly happy guy]; i.e. stable housing and job).  There is no denying he will wrap his head around concepts that I have a snowballs-chance even reading without getting heavy eyes, let alone understand.  Knowing this, the director contrasts our preconceived notions of an MIT level genius/artist/inventor by are introducing Joe to us as he washes dishes, picks through trash and speaks a language to his comrades that only he understands.  Joe Davis is self described as an artistic genius (and regular genius) that, if we don’t  appreciate him, it’s because we just don’t get him yet.  A bit insulting, but maybe that’s because I just  don’t get him yet(?).

The “story” (term used loosely as a documentary narrative never truly forms) meanders as we tag along with Joe in his many adventures in creating his art, various employment follies  and various rants that come off as a stoner riffing at a party, stringing lines together that sound deep, but have no real context.  He  struggles in his day to day to find who he is and seems to take no real accountability for himself.  This unwillingness to grapple with the consequences  of his actions may in fact be the reason the film is never really allowed to give us any kind of arc we are itching for. (The film does display this lack of accountability, beautifully and  in what COULD have been a powerful moment, if Joe, for a second, took the question seriously.  In this moment Joe was looking for a way to, essentially, render severe storms,  such as hurricanes, impotent [and having had his childhood home devastated by Katrina, this is more than understandable].  As he is explaining to a companion his idea, a question is brought up that boils down to: even if you could, should you?  Joe brushes this aside as though the moral issue is unimportant.  His lack of interest in exploring this area does speak volumes to his personality, but it was clearly difficult for the director to bend that void into an arc.) 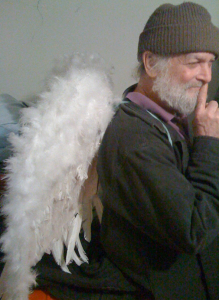 Throughout the film I found myself getting more annoyed with the character of Joe.   I use the word “character” because I am fairly certain Joe used this platform as a way to write his own story.  An example of this: In the film Joe provided an explanation of how he lost his leg.  He mentioned and alligator snapping it off, and we were treated to a shot of a fairly tame gator wading in the water (thankfully no re-enactment). However, later in the film, and not soon enough after to want to point out this discrepancy as a point of interest and insight into the psyche of Joe Davis, a friend of Joe’s said the leg was lost in a motorcycle accident.  (In the Q&A after the film we were told we could not get into the why’s of this splintering of the story, but that the contradicting footage was left in there on purpose.  It came off more as a justification of  something unintended rather than an explanation of why the fork in the story. As another aside, I am not sure why getting your leg eaten by an alligator is cooler than a motorcycle accident, but maybe he has a Captain Hook fantasy and wants to have a story like his [with the obvious substitution of hand/hook for foot/peg leg].)   The director seemed to rely on the eccentricity of Joe to carry the film, but his shtick worn thin 20 minutes in, and I spent a majority of the films’ remaining run-time trying to figure out ways in which he annoyed me and why it annoyed me.

Overall I felt that the story lacked any vision.  It is most likely a good thing for a documentarian to not go in with a story in mind as it could tempt the filmmaker to want to lead the characters to reflect this desired outcome.  However, as the filming process migrated towards the end, a story should have formed, and to my disappointment, it didn’t.  Joe Davis is an eccentric artist and a genius. Nothing to write home about, and certainly nothing to film.