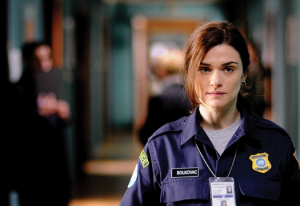 I wasn’t sure what to expect with “The Whistleblower.’ I hadn’t heard very much about the film, and I knew very little about the subject matter. However, I left the theater pretty much sure that this was one of the best films I’d seen during the entire Independent Film Festival of Boston.

The film is based on the experiences of Kathryn Bolkovac (played by Rachel Weisz in the film), a Nebraska police officer who served as a UN peacekeeper at in post-war Bosnia. Joining the U.N. as a means to earn money so that she could relocate for the sake of being closer to her daughter at home, Kathryn arrives in Bosnia and begins observing the local police on behalf of a company contracted by U.N. in this time of post-war transition.

She immediately observes many shady things going on within the Bosnian police, as well as her own organization. She uncovers a sex trafficking ring that is being supported not only by corrupt local police, but corrupt peacekeepers. So much to the point that they are not only attending these prostitution bars, but participating in the trafficking of these women from nearby countries.

We specifically follow the story of one girl, and Kathryn’s struggle to save her as well as shed light on this horrible reality. But she hits road blocks constantly, from the local organization allegedly “helping” these kidnapped girls, to her own superiors.

The film is brooding, dark, violent, but from what we learned in the Q&A that followed, the reality is much much more frightening. The girls were made older in the film but in reality, they can be as young as 11 and 12 years old.

The film is horrifying, but one can hope with such talent as Rachel Weisz, enough people see ‘The Whistleblower,’ that it’ll bring more support to stop these horrible acts from taking place.