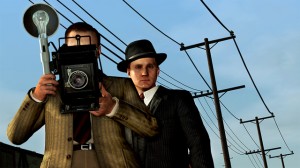 Developed by Team Bondi and published by the stellar Rockstar Games, L.A. Noire represents what I feel is a huge break through in interactive content. While much of L.A. Noire is a game, it its very core, L.A. Noire represents what I hope is a step forward for the medium. L.A. Noire is probably best described as being an interactive movie, or television show. The game deals with mature themes, and for the first time, the entire performance of a an actor is captured through new motion capture technology, so ever tick, wink, and suspicious look is there for you to see.

Your name is Cole Phelps, a WWII vet who is starting his career off as a patrol-man in the LAPD. As the game progresses, you move your way up to traffic detective, homicide, vice, and eventually arson. All while being told a story relating to Phelps military service.

Games from Rockstar have always been break throughs, whether it be the open world of GTA III, the story of Vice City and San Andreas, the rendered detail in GTA IV, and taking those elements and putting them in the wild west in Red Dead Redemption. Here they take it one step further. Los Angeles is alive in this game, rife with pedestrians, signs, and familiar landmarks, from the ding on the traffic signal, to the music coming from the radio, it is absolutely immersive. Though the game is technically open, it pushes you along the story like no other game from the publisher. Honestly, I’ve never been a “completionist,” but I do terrible at open world games, I get so side tracked with the world, that I never end up continuing with the story. L.A. Noire moves things forward, but its nice to know those side missions are there for you. 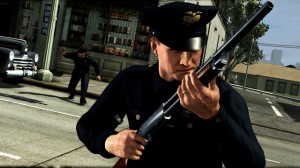 L.A. Noire for some reason triggers memories of the point & click adventure games I used to be obsessed with as a kid. The classic Lucasart games like Indiana Jones, The Dig, and also Kings Quest & Hugo’s House of Horrors. The interaction of the environment is great, and the dialogue detailed.

The fighting mechanics are so-so in this game, but that is always a criticism of these guys. However, it wasn’t so bad in Red Dead. In this, the fighting isn’t the necessarily the focus, so its quickly forgotten because of the story.

If you’re looking for a unique, entertaining, and enthralling game, look no further than L.A. Noire.

If you’ve got both a PS3 and an Xbox, I’d recommend the PS3 version. The Xbox version comes on three discs.