Revenge may be a dish best served cold, but what if that dish never ultimately satisfies you?  South Korea-import I Saw the Devil, a film centered on a man who believes that closure for the murder of his fiancé can only come by tormenting and torturing her killer, plays with that question in a very interesting, if not perfect, way.  The film spends little time setting up our main character, Soo-hyun, and his relationship with fiancé Joo-yun, instead choosing to gruesomely dispense with her quickly, and thus setting in motion almost 2 and a half hours of pure, revenge-driven violence. 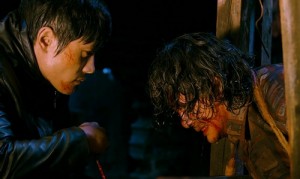 We don’t know much about Soo-hyun, only that he is some sort of special ops guy, a character point which felt added on to explain away his fighting abilities and access to a very useful tracking device.  The audience is dropped into his life moments before everything is taken from him, and we watch as the flip switches inside of him: stone-faced at Joo-yun’s funeral and looking as though he is already set on revenge, Soo-hyun is quickly on the hunt for Joo-yun’s killer, played by Choi Min-sik, who you probably recognize as the lead in one of the best revenge films out there, Oldboy.  Sure, I Saw the Devil makes momentary attempts at coloring in its characters, but those moments are few and far between, and those broad strokes don’t do a convincing job showing of us that these are real people with real motives.  The characters are pieces of a story whose purpose is to move us from the beginning to the end.

But on a certain visceral level, that’s actually ok.  The facelessness of the characters actually lends the film a hand in making an argument regarding revenge and violence upon those who have done wrong by us.  Choi Min-sik’s character Kyung-chul is a pure, unshakeable force of evil.  He is not dissimilar to Anton Chigurh from No Country for Old Men or the T-1000 from Terminator 2: soulless and able to take lumps and get back up to keep coming at you.  And he takes some serious lumps.  Once Soo-hyun discovers that Kyung-chul is the killer, he begins this game of maim and release where he shows up just as Kyung-chul is about to do something horrible and proceeds to terrorize, break, and then release his victim over and over again with a blank-faced intensity that clearly demonstrates a focused vengeance, a hope that he can visit upon his victim the same pain his victim caused. 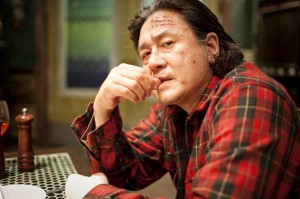 And this game goes on and on.  At first it seems as though director Kim Ji-woon wants us to feel that action movie placation of good triumphing over evil, as Kyung-chul is always stopped just in time and served his punishment.   But as the film goes on and it becomes more apparent that Kyung-chul is not only not going to change, but actually starts to enjoy the game himself, that thrill of revenge gets diluted and we can’t help but wonder along with the film, what good is this doing?  What has changed?  Soo-hyun’s fiancé is still dead, and the evil is not only still alive, but actually growing and turning back on Soo-hyung.  And this is where we seem to find the heart of I Saw the Devil.  Our thirst for blood in retaliation for the wrongs done upon us may leave us feeling just as empty or, even worse, may end up hurting us or those we love more.  Kim Ji-woon’s carefully crafted shots show a poetry that runs deeper than just on-screen violence for the sake of titillation.  And he does a great job at showing the shifting of momentum and control as the film plays out.  Ji-woon’s direction makes it impossible to not see that the film is asking more about revenge than what is simply shown on the screen.  And that’s what makes I Saw the Devil worth viewing.

Of course, then Ji-woon seems to step away from all of those questions with a denouement that wraps things up cleverly, but seemingly contradictory to what he spent the past 2+ hours showing.  I suppose it depends on your reading of that final shot of Soo-hyung, but the resolution of the film’s chase seems to wrap things up a little too nicely, which was sort of a disappointment.  But still, I Saw the Devil is a beautiful movie with a great cast (especially Choi Min-sik) that does a good job of asking an interesting question, even if it was a bit rough around the edges.