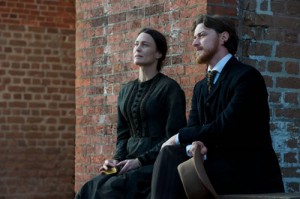 ‘The Conspirator’ is the first of hopefully many historically accurate films from the newly founded American Film Company. Directed by Robert Redford, and starring James McAvoy and Robin Wright, the film chronicles the trial of the conspirators that were behind the assassination of President Abraham Lincoln.

Released in the year of the 146th anniversary of President Lincoln, the film opens on eve of the death of the President. The film gives you the entire background, introducing its cast of characters, both the conspirators, and the individual that would eventually defend one of them, Frederick Aiken (James McAvoy).

Aiken, a Union veteran of the civil war is assigned the case by his mentor, US Sentator Reverdy Johnson (Tom Wilkinson). He takes the case, reluctantly, despite his own feelings on the matter, everyone has the right to a fair trial. As he investigates his clients case, he uncovers evidence that suggests while the main caretaker of the boarding house, her involvement in the actual conspiracy was peripheral, only because of her sons involvement.

The film does an amazing job of telling the story, you can feel the shock and anger of the period. With a budget of $25 million, ‘The Conspirator’ does a fairly good job capturing the period. But something about it was off. At times, it almost looked like I was watching a PBS or History Channel special, rather then a theatrical film. Every light had this excessively soft halo, that totally cheapened the look of everything. The performances and writing were of such high caliber, I truly do feel that the experience was hurt quite a bit by its production value. I was convinced that the film was actually shot on video, but, my research says it was actually shot on 35mm. I was thinking it may have been the fact that I was viewing it projected digitally, but I do feel that even the trailer online has the same look and feel to it.

Many reviews/critiques of the film have attempted to find a parallel between the story here, and what has happened at Guantanamo Bay. I don’t find this to be accurate at all. It is both fascinating and unfortunate that parallels can be drawn between countless historical events throughout human history, however, I don’t believe it was the filmmakers goal to draw those parallels in the case of this film. The film presents the facts as plainly and realistically as possible, and nothing here is commentary on what is happening today, other then to show us, perhaps things haven’t changed as much as we think.

‘The Conspirator’ is an excellent, engaging film. If historical drama is not your thing, there won’t be a frame of this that you find interesting – but, if you have any interest in the conspiracy behind the assassination of Abraham Lincoln, this film is for you.