Skip to content
home Front Page, Movies, Reviews Review: Rise of the Planet of the Apes 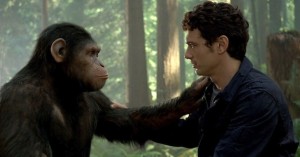 Director Rupert Wyatt only has one other feature film to his name, ‘The Escapist,’ so to hand over the reigns of such a big property like Planet of the Apes is definitely a big risk on the part of the studios. It shows that perhaps we’ve reached a time where the studios are finally seeing that with risk comes reward, and ‘Rise of the Planet of the Apes,’ is evidence of that.

Unlike most summer fare, there are two writers credited for ‘Apes,’ Rick Jaffa, and Amanda Silver. Often times summer films are written and rewritten, with the message getting lost. That is not the case here.

Will Rodman (James Franco) is a scientist whose been working to develop a cure for Alzheimer’s disease, testing his genetically engineered virus on chimpanzees. The virus gives an uncanny level of intelligence to the test subjects. One of the subjects becomes extremely violent, and it is revealed that it was all to protect her baby.

The chimp is killed, and the study is shut down. When Will learns of the baby chimpanzee, he takes it home. As he studies the growing chimp, he learns that the intelligence has been passed down, and that Caesar is at times surpassing the intelligence of his human counterparts.

Will continues his research, and years pass. Caesar connects with the family, and with Will’s father, Charles (John Lithgow). Suddenly, an incident occurs, and Caesar is taken into custody.

This is where things start to fall apart.

Caesar, played by Andy Serkis, is entirely computer animated, all of the animal effects in this film are better than I have ever seen. The emotion you feel when Caesar is separated from his family is great, best CGI performance since Serkis’ turn as Gollum.

The films weakest link is the character of Caroline, a veterinary doctor played by Freida Pinto. Her character is completely under developed, and her dialogue just takes you out of the film. In an otherwise excellent plot development, her purpose other than a romantic interest for Will, and it just felt tacked on.

As far as tying in to the rest of the series, it has been a long time since I’ve seen the original, but it definitely feels like

this film fits. You definitely feel for the side of the apes throughout, while I do feel like in the other films, it was Humans against Apes, so as an audience, you’re in a bit of a conundrum. While the film alleges (slight spoiler alert) that Human’s are at fault for their own destruction, it is the actions of a select few that cause the eventual demise – but everyone has to pay for those actions. As humans, we are put in a tough spot, but I’ll tell you one thing, this film definitely has the support of groups like PETA.

Rise of the Planet of the Apes is definitely a standout in what has quite the entertaining summer. I highly recommend this film to all.