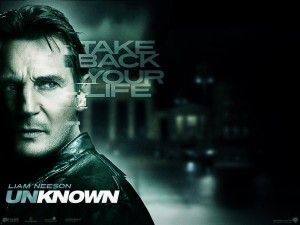 Liam Neeson: unlikely action star or unlikeliest action star?  At some point in the not too distant past, Hollywood decided that Oskar Schindler would be a pretty good candidate to drive a car backwards through the streets of various European locales while shooting guns or evading bad guys.  And so, we have Neeson starring in movies like Taken, The A-Team, and Unknown, or as I have decided to call it, Taken 2: Electric Boogaloo.  I wonder if Neeson will eventually get the action star cameo in some future installment of Stallones’ The Expendables.

Unknown stars the aforementioned Neeson as Dr. Martin Harris who travels to Berlin to attend a vague biotechnology conference.  Harris arrives at the hotel where he and his wife Liz (January Jones) are staying, only to find that his briefcase was left behind at the airport.  Thanks to lingering shots on the briefcase leading up to the realization that the case is missing, we know that this is important.  Harris immediately hails another taxi, helmed by Gina (Diane Kruger), to take him back to the airport, but is in a serious car accident on the way, leaving him in a coma for 4 days.  After coming to (and some exposition from his doctor about how his brain could be slow to recover relevant information) Harris eventually discovers that his wife does not recognize him and is in fact claiming that another man is Dr. Martin Harris (Aidan Quinn).  And lo, Unknown takes off on a wrong-man mystery as Harris 1 tries to figure out who he is, why people are trying to kill him, and the mystery that he suddenly finds himself immersed in.

For the most part, Unknown is a pretty solid film for what it is: a competent action film that crumbles as twists are revealed.  The film is engaging and interesting as Harris tries to figure out why he is no longer who he thought he was, thanks to solid direction from Jaume Collet-Serra and Neeson’s performance.  I think.  It’s hard to tell with Neeson these days.  There seems to be two Liam Neesons: one who gives his performance weight and nuance, and one who delivers dialogue with the clear enunciation of a man who has recently suffered blunt head trauma and is trying to relearn how to talk.  Schindler’s List has the former, Taken has the latter, and I think Unknown has someone who is sort of in the middle.  Neeson’s enunciation is impeccable throughout the movie, but his performance wasn’t off-putting and I found myself genuinely intrigued by Harris’s story for a while, so I have to say that Neeson was engaging.  And with a great supporting cast surrounding him (minus 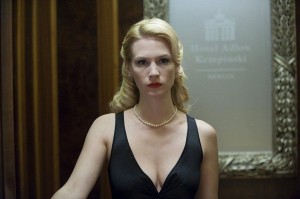 January Jones, whose role as Betty Draper in Mad Men seems to be an alarmingly fortunate fluke for the actress, as her line readings always sounding like line readings works well as Betty and make her seem like a disconnected actress everywhere else) including Kruger as the most attractive cab driver ever who gets caught up in the chase, and a late in the film appearance by the always welcomed Frank Langella, who arrival sadly signals the final twists and reveals that initiate the film’s third act and Unknown’s final undoing.

What Unknown is ultimately about is what really undoes the story’s competence leading up to its reveal.  As a wrong man mystery, Unknown is intriguing.  But as soon as that mystery is solved, the film becomes a silly, stock race-against-time film with Neeson the action star expertly kicking ass and taking names (and dropping the film’s dumbest piece of dialogue: “I didn’t forget everything.  I remember how to kill you, asshole.” Which, in my book, is up there with Halle Berry’s line from X-Men: “Do you know what happens to a toad when it’s struck by lightning?  The same thing that happens to everything else.”) towards the film’s neat and tidy resolution.  I obviously won’t reveal it here, but Unknown’s ending is relatively similar to the little piece of bees science talk that wrapped up M. Night Shyamalan’s The Happening.  Only in Unknown, it feels tacked on and completely unrelated to everything that just took place during the past hour and 50 minutes.

Unknown isn’t a great film, but it’s pretty competent, and will make for an excellent rainy Saturday afternoon movie on TBS.  When we’re as lost as Martin Harris, the film is engaging.  But when the mystery is revealed, I found myself wishing I was still in the dark.