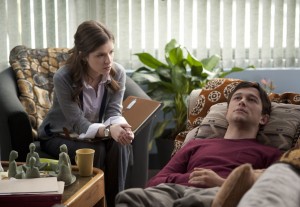 I wasn’t sure what to expect going into Jonathan Levine’s “50/50.”  Judging on the trailers, there was a good chance it could have been mostly a comedy, or, it could have been depressing and sad. Despite its subject matter, this film really is the perfect balance of both.

50/50 is written by Will Reiser, loosely based on his own experiences with cancer. Directed by Jonathan Levine (The Wackness), the film stars Joseph Gordon-Levitt, Seth Rogen, and Anna Kendrick, and sets out to take a realistic, yet humorous look at a young person suffering from cancer.

Adam (Gordon-Levitt) is 27-years old, and is a producer at a local public radio station where he works with his best friend Kyle (Rogen). His girlfriend, Rachael (Bryce Dallas Howard) is an artist, and they share a somewhat trying relationship that is under constant criticism from Kyle.

Worried about strange pains in his back, Adam goes to the doctor, where he learns that he has cancer. The news is shocking, as Adam has lived his life as cautiously as possible.

The news of cancer is trying on his relationships, not just with Rachael, but with his at-times overbearing mother (Anjelica Huston), and his best friend, who seems to have his own motivations for his friends sickness.

So much of this film is incredibly relatable, whether you suffer your own ailments, or know someone who has fought or is fighting cancer. The relationships between Adam, his friends, and family feel incredibly real, thanks to the everyman nature of Joseph Gordon-Levitt’s acting.

Gordon-Levitt has amazing chemistry with everyone he’s put next to. Whether its acting opposite scene stealing Seth Rogen, or the sweetheart rookie therapist played by Anna Kendrick, he has presence. Many people of late have complained that their tired of Seth Rogen, I am not one of those people. I’ve loved him since Freaks & Geeks, and I think his role in this film will appease even the haters. He’s used minimally, and when he is used, it fits perfectly.

The pacing of this film is incredible. In one scene you are laughing out loud, and two scenes later, you’re holding back tears. But none of it goes too far, it pulls at your heart strings, but there is nothing cheap or cheesy about what transpires.

I cannot recommend this movie enough, it is the first movie I’ve seen since ‘Blue Valentine’ that I left still thinking about days later. If you see one film this fall season, make it 50/50.