Reborn? Is this a re-boot of the 1st Johnny English but still with Mr. Bean? Did he die in the first one? I never saw it, nor had any need to see it, and the same goes with this one. I have to hand it to
Rowan Atkinson though…the man has busted his ass as Mr. Bean and all these ridiculous British characters for as long as I can remember. I don’t know a single person who enjoys them, but they seem to still get made and make money, so kudos to him. I actually feel bad ripping this movie apart basically because it’s supposed to be really stupid, isn’t it? It’s like making fun of a retarded person…there’s almost no point really. I’m sure I will never see this movie, but I have no hate for it and I would rather watch this piece of crap than Fast And The Furious part 12…those movies are a bigger waste of time than this. 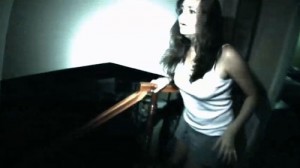 If there was ever a bigger waste of time, it was the first Paranormal Activity. Anyone who was actually scared by that movie must have been molested by their father and have some easy-to-go-to fear within them, because that movie was anything but scary. It was boring as hell. I’ve seen shows on HGTV that were more terrifying. Have you ever seen a basement flood? Do you know how much that shit costs to repair?? THAT’S real terror. This movie is another in the long line of “found footage” movies that people are still flocking to for whatever reason. I never saw the 2nd Paranormal Activity, and who knows, maybe it was better than the first, but I doubt it. If you want something much scarier in the same vein as this, check out this documentary I saw on night terrors. I’m not sure what it was called, but you can probably find clips of it if you Google it. They secretly recorded people who have extreme night terrors and that shit was frighting. Much scarier than this crap. Whoa….she stands by the bed for 45 minutes doing nothing….fre-e-e-e-e-ky!! Yawn. If this goes on Watch Instant like part 2, maybe I’ll check it out someday, but for now I’ll pass. 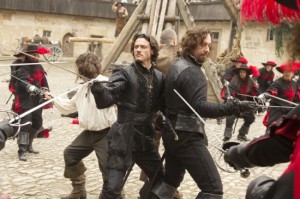 This is the biggest tragedy of the week. These kinds of movies that are supposed to take place 200 years ago but have like clever modern slang in them like “Hell yea!” and “You go girl!” make me want to put on a black trench coat and take a semi-automatic assault rifle and….well, this is the internet so I’ll say no more. This was directed by the OTHER Paul Anderson, not the awesome one who gave us Boogie Nights but the impostor who gave us the shitstains that are Resident Evil 1-27 and the impossible to fuck up but he did it anyway Alien vs. Predator. HOW DO YOU FUCK UP ALIEN VS PREDATOR?? A 6 year old blind kind with no arms could have made that movie infinitely
better! But he did it, and he will forever suck because of it. This is another re-telling of the Musketeers tale, which by all accounts, has never really been made into a great movie. You had the one from the 90s with Jack Bauer and Charlie Sheen and whoever else was pop at the time, but that was just basically a 90s version of this. Why can’t they ever make a good movie out of content like this? Sherlock Holmes has the same problem. Stop with the intense action and slow motion scenes and make a solid movie for Christ’s sake. Oh wait…I forgot that they just want kids ages 13-16 to go see this. Money, money, money over integrity. Fuck that. If I ever made a movie for theaters, if it made 50 bucks, but that 50 bucks came from people I respected, then it would be worth it. Sure, I’d like to be rich too, but selling you soul every time to get the cash is just tragic. But then again, Anderson keeps getting these gigs, so maybe he’s the smartest man in Hollywood. I guess you can’t blame him for sitting on a pile of naked women, while jacking off with $100 bills and jizzing
on a pile of gold bullion right? Right? Eh…..