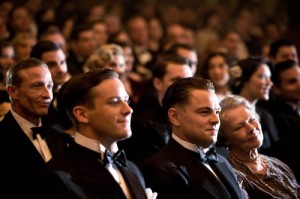 Clint Eastwood arguably has had one of the best careers in the history of Hollywood. He went from an iconic Western star, to a talented and great director. With excellent films like Unforgiven and Mystic River, my expectations for his work tend to be high, but for whatever reason, it has been hard for me to get excited for his last few efforts. As soon as I read that he was going to be directing Leonardo DiCaprio in a film about J. Edgar Hoover, my ears perked up. Would this be a fascinating inside look to a man’s life like “The Aviator,” or would it be muddled and boring like De Niro’s “The Good Shepard?”

The film bounces back and forth between the last few years of Hoover’s life, his early beginnings at the Department of Justice, pre-founding of the FBI, and the 30s, during the investigation into the kidnapping of Charles Lindbergh’s child, and his war on organized crime.

Those looking for an in-depth look at the history of the FBI, this is not that film. The film is strictly about J. Edgar Hoover and his various relationships – everything from his mother (Judi Dench), to his secretary (Naomi Watts), to his #2 man at the FBI, Clyde Tolson (Armie Hammer). The film also goes quite extensively into his political relationships with the likes of Robert Kennedy, and his infamous “files.”

The film only touches the surface of Hoover’s innovations, the importance of forensics, fingerprinting, and lab work – there is so much that was revolutionary about his tactics and I feel like a lot was either missing or completely cut out. That is where I was disappointed.

The good news: Leonardo DiCaprio is in top form in this film. DiCaprio continually goes above and beyond to transform himself into the people he’s portraying. This is no rehash of Howard Hughes in The Aviator, he fully embodies J. Edgar Hoover.

Perhaps, Eastwood’s intention wasn’t to educate us about FBI, but to give you a candid look at who J. Edgar Hoover was – rather then focus on what he founded. In that sense, the film succeeds. Despite leaving me wanting [a LOT] more, I still found the film fascinating, and if you have any interest at all into this complicated man, I think J. Edgar is worth a closer look.