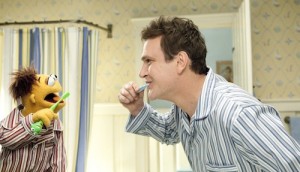 It’s rare when a franchise comes back from a long hiatus and actually succeeds at capturing something new and special. However, everything leading up to “The Muppets,” was suggesting otherwise. You had a lead writer/actor that was a true fan from top to bottom, you had the backing of a major studio, and, you had the cast filled with the original felt actors that made their debut so many years ago. So, how did ‘The Muppets’ do?

After some lackluster efforts, it has been years since a decent outing with Kermit and friends. Having not been in a major theatrical release since 99’s Muppets from Space, they were certainly overdue. Apparently, Frank Oz, of course one of the founders of the group, had been unsuccessful in pitching the studios. Then comes along Jason Segel. Fresh off the successful ‘Forgetting Sarah Marshall,’ and ‘I Love You, Man,’ the actor used his momentum to get his Muppets film green-lit by Disney.

The film tells the story of two brothers, Gary (Segel) and Walter (A muppet played by Peter Linz). Growing up in Smalltown, USA, Walter is the biggest fan of the Muppets. As adults, Gary plans a vacation to Los Angeles with his girlfriend Mary (Amy Adams), and invites his brother Walter to come with, so the pair can visit the Muppet Theater and Studios.

Of course, the plot thickens, when Walter discovered the evil oil tycoon Tex Richman (Chris Cooper), is planning on buying the Muppet properties under the pretext of building a muppet museum, but actually knows of a large deposit of oil underneath the land.

The story is fairly simple. Let’s be honest here, its a muppet movie, we’re here to laugh and sing along, not win Oscars. The film does exactly that. The songs are fun, the plot paper thin, but you’re watching the film smiling ear to ear – its easy to see that this film was made with a lot of love and passion for these wonderful, familiar characters.

Amy Adams stands out, showing that she continues to have some of the best range in the business. Jason Segel also did a great job of not hogging the limelight, the film is called ‘The Muppets’ for a reason. Another actor/writer/producer may have pushed himself center stage, but Segel definitely knows and understands who the star is here, and with very little dance and song skill, he carries himself perfectly. 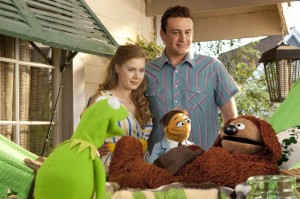 The one thing I wish is that the film had more celebrity cameos. What made the previous films and television episodes so fun is that you never knew who’d be popping by. The film does feature some great faces (and occasionally so new, the Muppets don’t even recognize them), but I would have loved to see some bigger names.

This movie is a great one to take the whole family out to, you’ll leave the theater singing the main tune, “life’s a happy song, when there’s someone by your side to sing along.”