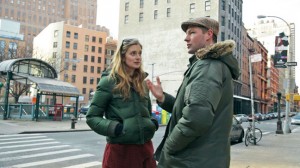 The film business is constantly changing. The last few years have been a renaissance of really great independent film. New filmmakers are being able to tell their stories with very little overhead, thanks to increasingly affordable high quality cameras. Now, it is easier to make the films you want to make, without the stress of pleasing investors/studio heads. In fact, its getting so much easier, and it is great to see established artists like Ed Burns leading the pack with films like ‘Nice Guy Johnny,’ and now ‘Newlyweds.’

‘Newlyweds,’ was, shot for the lowest budget possible, filmed on the run, and stars a group of really great actors. It’s a fun story about relationships centered around a newlywed couple.

Buzzy (Ed Burns) and Katie (Caitlin Fitzgerald) are two newlyweds that feel they have the perfect marriage. Both deeply in love, they feel that the reason their relationship works so well is because they hardly see each other. Both on their second marriage, they find the equilibrium they’ve reached disrupted when Buzzy’s half sister Linda (Kerry Bishé) shows up, and Katie’s own sister is having her own marriage problems.

The film is shot entirely on a Canon 5D, a DSLR that is quickly becoming the camera of choice of many filmmakers because of its affordability and great looking image. The film was mostly shot on street corners in Tribeca, and different restaurants and bars around lower Manhattan. This style gives the film almost a fly-on-the wall feel, less polished, rough around the edges, almost unrehearsed. An otherwise fairly simple story is enhanced by the great characters and actors, and charm from the way it was shot.

While the 5D works very well for most of the film, there are definitely a handful of scenes that shake to the point where you actually notice it. For the most part, the handheld style works, but the specific scenes I’m thinking of really draws attention to the fact that someone is literally hand holding a digital SLR camera. But still, it isn’t enough to ruin the rest of the film.

‘Newlyweds,’ isn’t Shakespeare by any means, its also not your typical independent film. It’s not trying to be provocative, controversial, it is simply a fun, better than average romantic comedy, with echoes of Woody Allen. What I find fascinating is that Burns was able to make a commercial film, the way he wanted, and it cost under 10k to produce. Granted, he’s Ed Burns. Not just anyone can make a film like this and distribute it to on-demand services everywhere. But, it definitely is something all filmmakers should recognize as a step in the right direction for everyone.