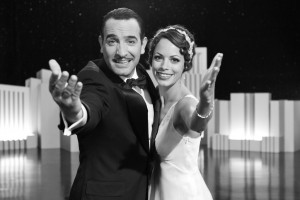 I feel like I had to be the last person on earth seeing Michael Hazanavicus’ unique and original film ‘The Artist.’ Despite being out for more than a month, the theater was packed to the brim, with folks having to sit down in the aisles. The film stars Jean Dujarin and Bérénice Bejo as George Valentin, and Peppy Miller, two fictional stars of yesteryear, at the tail end of the silent film era.

The film opens in 1927, at the premiere of Valentin’s latest film. As he’s leaving the theater, he’s mobbed by his adoring fans. A girl falls through the crowd as she’s picking up her dropped purse, and bumps into Valentin. He poses with her as she mugs for the cameras, and the scene makes the cover of Variety magazine.

The girl, Peppy Miller, is excited at the fact that shes featured in an industry magazine. She goes to the studio to audition as a dancer for Valentin’s next film.  Miller is spotted by Valentin, who insists that she have a role in the picture. Valentin helps her blossoming career, and she continues her rise to become a prominent actress.

Two years later, the boss at Kinograph Studios, Al Zimmer (John Goodman), announces to Valentin that the studio is going to exclusively produce talking pictures. Valentin ignores what he perceives as a fad, and decides to produce his own epic silent film feature.

The film’s choice to be a silent film about the end of silent films could have easily been a gimmick that wears off. Instead, Hazanavicus completely captures the story with a complete absence of dialogue as they were able to do back then. The film isn’t scenes wall to wall with title cards. The actors are completely expressive, so that you know exactly what is going without actually hearing the dialogue. It’s absolutely amazing. The film is able to capture so many emotions, while managing to be funny and heartwarming.

While watching ‘The Artist,’ I was going out of my way to try to notice things that would kill the fact that the film captured the period perfectly, but I couldn’t find a thing. Everything about it felt like the film could have been made in the period where it is taking place. 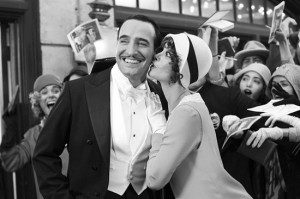 Dujarin and Bejo are perfect as Valentin and Miller. Bejo looked and acts like she could have been a contemporary of Mary Pickford or Gloria Swanson. The film has a lot in common as far as subject matter goes with Sunset Boulevard. It is sad to see someone hanging on to era that is on its way out, and it is amazing how much ‘The Artist,’ is able to pull you into its world.

It’s great so see such a unique film doing so well with audiences. Despite its success, I don’t think ‘The Artist,’ will start a trend of new, modern silent films. If anyone else does try, they are doomed to be compared to this amazing film. However, I can’t see anyone coming close.