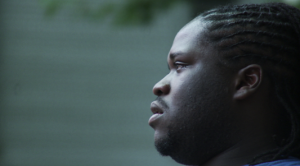 A unique story of friendship, race, and self-discovery, Welcome to Pine Hill was born out of a chance encounter between filmmaker Keith Miller, and star Shannon Harper, who found themselves arguing over a lost dog one night in Brooklyn.

The film had its world premiere at Slamdance last January, and won the Grand Jury Prize, and will be screening at many film festivals across the country.

The film follows Shannon, a reformed drug dealer who now works as a claims adjuster by day, and bounced by night. He receives earth-shattering news that causes him to make peace with his past, and search for freedom beyond the concrete jungle of New York City. Going between the world of fact and fiction, Shannon Harper plays himself, and is supported by an eclectic cast of emerging talent, and real people.

The film is a collaboration with the Brooklyn Filmmakers Collective, the film is a 2011 Independent Filmmaker Lab participant, and Keith Miller’s debut feature film.

The film screens at IFFBoston, Sunday, April 29th at 8:00pm at the Somerville Theater. Tickets are available at IFFBoston.org.