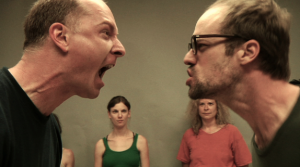 Ok, Good from director Daniel Martinco is a character study of an actor beginning to unravel. The teaser trailer features actor Paul Kaplan (Played by Hugo Armstrong) in what appears to be pulled from a series of “auditions,” saying his name over and over again – at the end, clearly expressing a bit of frustration.

The film is the story of Paul Kaplan, a typical LA actor, going to auditions, sending out headshots, taking movement class, and listening to motivational tapes in his car. Paul, struggles through a series of setbacks that pushes him closer to the edge.

Being in actor in LA is a constant flow of rejection, and as a sucker for narrative films that come of almost as cinema vérité that this one seems to be definitely peaks my interest.

The film had its world premiere at the Slamdance Film Festival, and played in competition at the Atlanta Film Festival.

Ok, Good screens at IFFBoston at the Somerville Theater Saturday, April 28th, 2:15pm. Tickets can be purchased at iffboston.org.