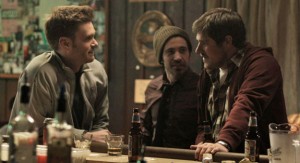 Fairhaven is the first feature from writer/director Tom O’Brien, and tells the story of three friends, reuniting in their hometown.

Jon (O’Brien), a former high school football star, is aspiring to be a writer, and is leaving his job assisting as a fisherman to pursue his dream. Dave (Chris Messina), is brought back to Fairhaven due to the death of his Father. Sam (Rich Sommer), is the only one in the bunch to have a child, and is divorced.

The film goes back and forth between the complexities of Dave’s relationship with his family and friends, to the challenge’s Jon is having with his impending life changes.

O’Brien’s love of Woody Allen and Robert Altman is clear by the dialogue – just about every scene is focused on dialogue. Characters will talk over each other, and everything almost has an improvised feel (whether or not it was, I’m not sure), but it still feels natural and realistic.

On the surface, the Fairhaven is a fairly simple story – however, the depth of the characters and their relationships complicates things. It takes the film longer than usual to set up where its headed, but once the course is set, its smooth sailing from there.

The film was shot mostly in Fairhaven and the surrounding towns. They did an amazing job picking great locations, every scene felt extremely natural and realistic. Almost as if they showed up, set the camera up and went. The DP did a great job pushing what was no doubt a digital cinema camera to the limit, with rich contrasts, and great lighting.

I enjoyed the film, and am definitely curious what O’Brien will do next. The film is currently seeking distribution, but with some fairly recognizable cast members, I hope the next step will come to them with ease – Fairhaven definitely worth seeking out.