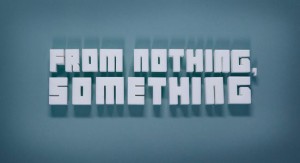 Creativity is an amazing process, and in the documentary From Nothing, Something, director Tim Cawley sets out to find out how it works for different types of people. What similarities? What are the differences? What results in a fascinating film that celebrates all forms of scientific and artistic creation.

The film features interviews with cancer researchers, a novelist, architect, comedian, a cartoonist, chefs, a singer-songwriter, and more. What it finds out is that despite the differences in craft, there are common methods that help realize ideas.

Some notable subjects featured in the documentary are Sara Quin of Tegan & Sara, and writer Tom Perrotta (Election). It’s amazing to see the same passion in the eyes of Perrotta and Quin as we see in the eyes of cancer researchers Moungi Bawendi and W. David Lee or video game designer Jason Rohrer.

The story is highlighted by an amazing original soundtrack. I really enjoyed the graphical animation and motion graphics as well. The doc is cut together smoothly – we get a lot of information rapidly, but are still given ample time to process everything that is being said.

From Nothing, Something is a unique film, because unlike many documentaries you see at films festivals – it isn’t about a depressing or sad subject. Not only can you find similarities between the subjects and how they work with ideas, but comparisons and similarities can be drawn between yourself and how your creativity works. The film is a unique idea, and executed with passion and precision.