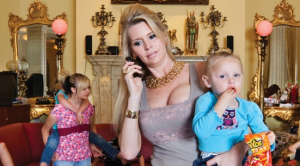 What happen’s when you go from having anything, to not being able to afford it?

It’s easy to look at Lauren Greenfield’s documentary the The Queen of Versailles and be shocked, even disgusted at the wealth of David and Jackie Siegel. But that’s not what the film is about. Not once did I feel that Greenfield was mocking, or asking the audience to laugh at her subjects. What she was doing was painting an elaborate, detailed portrait of an extremely wealthy family. Queen of Versailles is the anti-Real Housewives of wherever – rather than romanticizing their position in life, the film does a really great job of showing them us as they are. This isn’t a caricature, it’s definitely the real deal.

The film starts as David and Jackie Siegel are in the midst of planning and designing the largest single-family home in America. Both came from humble beginnings, and in the 70s and 80s, Siegel built his empire, Westgate, a timeshare company. Jackie, his fourth wife, was former Miss Florida, and married David in the mid 90s. Together, the couple has 7 children, and have taken on an 8th, Jackie’s niece.

The home, a merger of Versailles and the top three floors of the Paris hotel in Vegas, is a 90,000 square foot structure that is the definition of luxury. The plans for the finished house have marble everywhere, gold plating, paintings, antiques, and 30 bathrooms.

The film turns from a story about living in luxury to a riches to [almost] rags tale – following the completion of the Planet Hollywood Westgate towers in Las Vegas, the bottom falls from underneath them as the sub-prime mortgage based timeshare business falls apart along with the rest of the economy.

Greenfield followed the Siegel family for two years, and it seemed like nothing was denied as far as access goes. There’s a lot of stuff that could be fairly embarrassing for the family, moments like Jackie asking what the name of her driver is while renting a car from Hertz. With limited staff at their home, the house becomes overrun with dog feces and clutter.

Should we feel bad for the Siegel’s? No, because I don’t believe that was Greenfield’s intention either. What we have here is an amazing record of just how the economic downfall affected even the most well off family. What’s it like for the super rich to have to cut back? Just as much a culture shock as it’d be for a middle class family to cut back. Just super amplified. To borrow a quote from a friend who also saw the film, if I’m ever that rich, I’ll be sure to have a rainy day fund.