Prometheus is one of those films that you are much better of not knowing anything about going in. Which is why I almost didn’t write this review. The less you know going in the better. The trailers actually did a great job of giving you just enough information to get you in the theater, and without any context, really very little information beyond that. So I urge you, please stop reading this review, if the trailer intrigues you enough, then go see the film. My review won’t contain any spoilers, but regardless, I think Prometheus is a film that should be experienced with no opinions other than your own influencing your experience.

Ok, we got rid of them, let’s talk about the movie.

The film is about a group of scientists, traveling to distant moon known as LV-223, where they believe the questions as to who created humanity can be answered. On Earth, Archeologists Elizabeth Shaw (Noomi Rapace) and Charlie Holloway (Logan Marshall Green) find similarities in cave paintings and drawings separated by continents and thousands of years, that all contain similar imagery – a large being, pointing toward a specific group of celestial bodies. They match the images to LV-223, and with generous funding – set out to their destination. 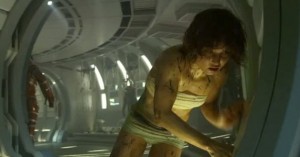 The team is also accompanied by an android, David, played by Michael Fassbender, a creation invented by the funder of  the expedition, the wealthy eccentric, Peter Weyland (Guy Pierce).

The films imagery is quite spectacular. The landscapes were presented were at times mind-blowing, how much of it was generated with a computer, and how much of it was real – at times it was hard to tell. The structures the group finds were definitely inspired by HR Giger’s work on the original Alien – and since they find more than just a ship here, it is expanded on.

There are definitely some moments in the movie where you’ll find yourself shaking your head, thinking the word “really?” Quite a few times. But, honestly, a few days removed from my screening, those holes aren’t bugging me at much. It is, after all, a sci-fi film, there has to be some suspension of disbelief.

Additionally, some key characters definitely lack development, and I can’t help but feel they were cut for time, a disservice to the film as a whole. But, like many of Ridley Scott’s epics (from Blade Runner to Kingdom of Heaven), he’s notorious for having excellent directors cuts, that often times are better than the theatrical release. Is the film bad without these missing scenes? Absolutely not. Will I be hoping for a Directors cut when the movie comes to Bluray? Absolutely. 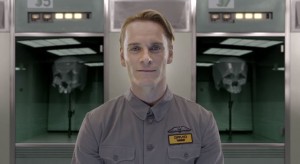 The best character in the film, by far, was Fassbender’s David, and I’m not alone in that sentiment. I’ve read things online about folks wanting to see films just about David’s time alone while everyone is in hyper sleep. While I don’t think this spin-off will also spin-off to a film about David, I do think his performance is excellent.

The word prequel is being tossed around quite a bit for this movie, I’d like to clarify it based on what I’ve gathered. Prometheus, while taking place in the same universe as the Alien films, is not exactly a prequel to that storyline. Do the events in this film effect Alien? Sort of, the central “characters,” definitely have a relation to that series, and their purpose definitely sheds some light on the creatures in Alien. But, at the end of the day, the Alien film takes place on LV-426, and this is LV-223.

Ridley Scott commands epic films of this nature, and he directs Damon Lindelof and Jon Spaihts script excellently. While the film, as far as Scott’s work goes, is not his best, it is entertaining, and thought provoking. I’ve found myself pondering and talking about the film since I saw it. Prometheus, while containing thrilling and horrifying scenes and scenarios, is not a space horror film as its trailer may suggest. It is a film about humanity, traveling great distances to find an answer to our deepest, greatest questions. What do they come up with? Well you’ll just have to see.

Now, if you’ve seen the film – I highly recommend reading this amazing spoiler filled analysis by Cavalorn over on livejournal. While his theories may be a bit out there, it definitely gets you thinking.