Skip to content
home Editorial, Feature, Front Page, Movies Top 10 Sequels That Shouldn’t Have Been Made

In no order, here is a list of some terrible sequels. I know…people might argue other titles like Teen Wolf Too, Weekend At Bernies 2, Caddyshack 2, and sure, those are pretty shitty but you have to look at expectations. Was anyone under the guise that Weekend At Bernie’s 2 would be awesome? I hope not. So here are some high expectation, low payoff sequels. 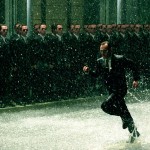 Alot of people give Matrix 2 a ton of shit, but I think, while kinda bad, that Matrix 3 is legions worse. Matrix 2 at least was as entertaining as part 1. (I think the entire saga is vastly overrated and sort of boring myself). Matrix 3 is just pure garbage wrapped in diarrhea with a grogan bow on top. There is nothing good about it, and in fact, I gave it a second try recently, and was bored to literal tears. Terrible movie.

Ocean’s 11 was pretty silly, but at least it had some fun going for it. Even though every part of their heist went flawlessly, and really had no level of threat for their caper, it was still fun to see Clooney, Pitt and Damon joke around with each other. Then they took it too far. Ocean’s 12 is like watching a group of rich assholes just look at each other and grin all day. I mean, this was the biggest “I’m a handsome, rich celeb” pat on the back if there ever was one. Even the preview had a 10 second shot of just Pitt and Clooney  laughing and smiling. Just a poorly written, poorly acted, poor movie all around. 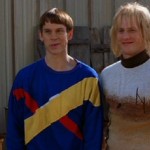 Okay, I know I prefaced this article with the “this will be all about high expectation movies” but I lied a little. I know no one expected Dumb And Dumbererererrrr to be good, and it wasn’t. But did it need to be THIS shitty? I mean, aside from two fucks doing their best Jim Carrey and Jeff Daniels impressions, what was the point of this movie? Did anyone on earth want a prequel to Dumb And Dumber? I bet if you asked one million people this question, you would get a 98.6% result in the “NO” category. I would bet money on those odds. This movie was dumber than the title suggests. I hear they’re making a sequel to Dumb And Dumber now, but I feel that the Dumb And Dumber anus has been raped too hard from this prequel that it’s in therapy and has some serious emotional issues. A.K.A no one gives a shit anymore. 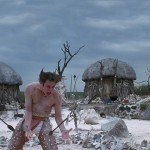 Maybe it’s just me, but I think the first Ace Venture a is fucking hysterical. What I like about it is that Ace himself acts like a complete retard and annoys everyone he is around, but he’s a goddamn great detective, and he solves these cases that stump the police with ease. I feel like he acts like a retard just to be cocky, and that’s why I think it’s so funny. But then they made part 2. In this movie, he IS a retard. He’s a terrible detective in this. He bumblefucks around because he’s a bumblefuck, not a good detective. Plus, he’s suddenly terrified of bats? Who the fuck came up with that idea? This movie sucks all the life out of the first one…and it just plain sucks. 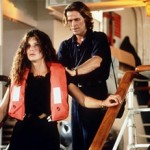 It’s never a good idea to make a sequel to an awesome and successful movie and then eliminate the main star from the picture. I’m sorry, but you cannot coast on a Speed sequel with just Sandra Bullock. I mean, aside from being annoying and boy-ish, she can’t carry an action franchise, even if you toss Jason “Wooden” Patric. A convincing action star, he ain’t. The only shining star is watching Willem Dafoe cash his paycheck as the bad guy. And I mean you can literally watch him go to the bank and cash his paycheck for this movie. It’s on the special features. 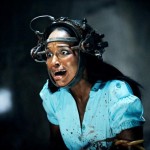 In the 80s we got endless sequels to Nightmare On Elm Street and Friday The 13th, and people pissed and moaned about how bad they were. I bet you fucks would do anything to get that level of entertainment back again, right? The Saw franchise is an abortion to horror. And not because of the gore. The gore is good. It’s mainly because who gives a shit about Jigsaw? He’s such a lame villain. Freddy had charisma. Jason had menace. Jigsaw has….cancer? So scary. Well, I guess cancer is sort of scary if you have it, but a cancer patient trying to kill me doesn’t do much for me. The traps get crazier and crazier and as the series goes on, we get different psychos becoming Jigsaw for whatever reason. I’ve watched all these movies and was so bored, I could barely tell you anything that happens. Plus, the editing sucks. I want to watch a horror movie, not a fucking System Of A Down music video. Don’t cut your horror like MTV, just a tip. It takes away everything that is effective about a horror movie. The first Saw isn’t great, but it was clever….these are just the last few farts after the mega turd plops out. 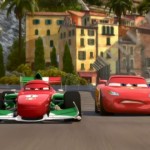 I love Pixar movies, like everyone else. I think they’re amazingly written, hilarious, incredibly animated and just individual treasure. So what in the fuck was Cars 2? First of all, Cars itself is probably their weakest movie, but you can still salvage some great moments about redemption and learning to be selfless. Cars 2 is just some lame action movie or some mystery, I don’t even know. When you make Mater your main character, you’re in trouble. Would you let your redneck uncle from Vermont lead the way on an important adventure? I didn’t think so. So why would anyone let fucking Mater out of the garage for anything? The movie isn’t funny at all, and there was so much crap going on, that after 10 minutes I just stopped giving a shit. Huge bummer and first Pixar fail. 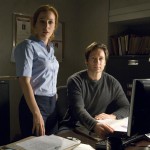 X-Files: I Want to Believe

I was never a big X-Files fan when it was on tv, but I did really like the first X-Files movie. I thought it had only a handful of inside jokes, but all around, someone who hadn’t seen the show much could get it and enjoy it, which I did very much. This movie though, after the 11 or 12 year wait was…..what was it actually? I mean, what even happens in this movie? It’s not even about monsters or aliens. It’s about….wait….what the fuck was it about? Nothing happens in this movie. Mulder and Scully talk and then they drive and talk some more and….talk…and drive I think, no wait, they talk then drive….I think. God, what a fucking snooze fest. It’s a 2 hour shot of Melatonin. SNORE. 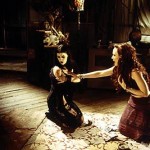 Blair Witch Project sucks, but it broke some nice ground. Well, I wouldn’t really say nice because found footage movies are shitty, but still…I appreciate pioneers to some degree. But when they tried to cash in on the name and make an actual movie, well, it was worse bomb than the one that sunk the U.S.S Arizona…probably more people died too. They tried to go for some like haunted house shit. I don’t know, it was a long time ago, but I know that it was just really bad. Avoid. 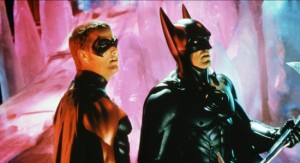 “I want a car. Chicks dig the car.” “This is why Superman works alone.” These are the first lines uttered in the worst sequel of all fucking time. From Arnold’s “Frost you!” to the Bat-nipples to fucking Alicia “I feed my child chewed food from my mouth like a bird” Silverstone, the only Bat in this movie is the bat-shit insane the producers were for letting one of the worst directors in history Joel Schumaucher take over what was an awesome franchise. It was like watching a snuff film, because Schushitter really did muder Batman in plain view in front of us all. Back in 1997, I gave most movies the benefit of the doubt. Even if they were “bad” per-say, I would find something good about it and rate is 3 stars or so. This was the first movie that I fucking HATED. I left the theater full of rage that millions upon millions of dollars were spent making this total face-rape of a movie. I was so mad, that I went to a record store and STOLE the Smashing Pumpkins Batman And Robin soundtrack because I refused to even put one more penny into this franchise. Seeing my parents burn in a fire would be less painful than sitting through this fucking godawful movie again. Nolan’s Batman movies are extremely overrated, but they at least gave mouth to mouth to the franchise that Schumaucher killed. I gotta give the man credit for that at least. He took Batman and just said “I’m a fuck you so hard that you die.” and that’s what he did. South Park made an episode where Spielberg and Lucas rape Indiana Jones to death…but did they fucking see this movie? This was an actual assault. It almost made me hate Schwarzenegger, and I forgave him for Jingle All The Way!!! HATE HATE HATE HATE!