Paul Thomas Anderson is a fascinating filmmaker. His films spend years in production, no doubt evolving and building an epic tale that tells a thoughtful deep story that needs time to sink in. His latest, “The Master,” is no exception. Featuring amazing performances by Joaquin Phoenix and Philip Seymour Hoffman, “The Master,” is a study in post-traumatic stress, and tells the life of a soldier returning from World War II.

The film opens on Freddie Quell (Phoenix), lying on a beach in what appears to be the South Pacific. He leaves the war, no doubt effected negatively by what he’s just experienced. After spending some time in a hospital, Freddie takes a job as a photographer in a local department store. Freddie clearly has a drinking problem, which is furthered by his homemade alcoholic beverages. He finds himself in Northern California, working on a cabbage farm. Accidentally poisoning an elderly coworker with his concoction, he becomes a drifter, eventually ending up on a Yacht commanded by Lancaster Dodd (Hoffman), the leader of a movement known as The Cause.

The pair hit it off, and Dodd and his family set out to help Freddie with his problems. Hoping that Dodd’s philosophies can lead him to salvation, Freddie willingly participates.

The film is beautifully composed, and as a contrast to the fast paced, speedy films we’re used to these days, Anderson lingers on the moments. The film starts up this way, with a long, thoughtful shot of Freddie in what appears to be a boat, in full uniform. Joaquin Phoenix embodies the character of Freddie much like Daniel Day-Lewis becomes the characters he plays. You quickly forget that Freddie is a character that is being acted, Phoenix’s mannerisms, even his posture don’t seem to be his own. 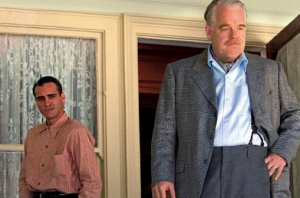 While much of the pre-release buzz of the film was that it was inspired by the story of Scientology, that simply isn’t what this movie is about. “The Master,” is a Steinbeck-esque journey, about a World War II Veteran, and his journey back into a world that is rapidly changing. Unlike previous P.T. Anderson films that end with a glorious climax, this film doesn’t feel like it has that moment. This isn’t the type of film that’ll leave you with a resolution either, you’ll find yourself pondering what exactly you watched for days.

With so many huge films coming this awards season, I’m not sure of this films chances in the Best Picture race, but it’d be a travesty if Hoffman and Phoenix aren’t nominated. Their performances were definitely among the best I’ve seen this year. “The Master,” certainly isn’t a film for everyone, but it is certainly worth checking out.