A Late Quartet tells the story of a world renowned string quartet, and begins just as some serious challenges arrive for the group. Directed and co-written by Yaron Zilberman, the film stars Christopher Walken, Philip Seymour Hoffman, Catherine Keener, and Mark Ivanir.

Peter Mitchell, the “elder” of the string group, plays Cello, and is also an educator at Juliard. During their first practice for the new season, Peter can’t seem to keep up with the rest of the group. He schedules a doctors appointment to hopefully get to the bottom of why things seem a little off. The doctor runs tests, and it seems that Peter has the early signs of Parkinson’s Disease, if the drugs slow the process down, he may at best, have one, maybe two seasons left. He comes to the group with the wish that they replace him, and allow him to retire after opening performance of the new season. 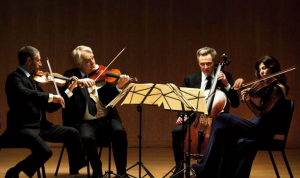 This throws a wrench into the group, as tensions already were running high between Daniel (Ivanir), who played first violin, and Robert (Hoffman) who plays second. Robert thinks that since the whole dynamic of the group is changing, it might be a good idea for them to rotate playing 1st and 2nd Violin. Mediating the tensions are Robert’s wife, and the Viola player in the quartet, Juliette (Keener). Always seeming to side with Daniel, her stance strains her relationship with Robert.

Also, there is a rather poorly developed side plot of Robert and Juliette’s daughter, Alexandra, played by Imogen Poots, who is being coached by Daniel, and ends up falling for him.

The film goes back and forth between being an interesting study of relationship, and performed exceptionally well, to suffering from a case of poorly written dialogue and development. I would have rather spent much more time with the complex history of the quartets relationship, rather then dwell on a rather creepy relationship between a teacher and his student.

When the film is good, its good, when its bad, its cringe worthy.

Ultimately, the film is kept afloat by the exceptionally talented, veteran cast. The end is decent, but nothing out of the ordinary. There is a lot of great music featured, and the films technical points are well made. It’s shot really well, and it makes great use of the city, it just suffers from some poorly developed characters, and at times, badly written dialogue.

If you overlook its faults, it isn’t the worst movie I’ve seen this year, but, that isn’t saying much. If the musical side of the film interests you, I’d definitely keep an eye on it for when it comes to on-demand and instant streaming, otherwise, spend a few bucks and buy Beethoven’s Opus 131 String Quartet in C-sharp minor, online.