Alfred Hitchcock is a director whose contributions to cinema will live forever. Hitchcock’s films pushed the limit of what was acceptable at the time, and stand up even today as some of the most terrifying, exciting, and thrilling films ever made. One wonders why such a man, who is so well known for his movies, has never had his story told. Perhaps part of the “problem,” is that Hitch wasn’t known for any scandalous hijinks, and any addictions or vices that would make his story more interesting. So, how did Director Sacha Gervasi do with his rather gutsy narrative directorial debut?

Anthony Hopkins was cast as the films title character, and Helen Mirren as Hitchcock’s wife, Alma. The film opens much like Alfred Hitchock presents, with Hitchcock himself introducing the story. He’s just premiered his latest film, North by Northwest, and is now on the prowl for his next picture. Many figures in his life are pushing various works on him, but he finds himself fascinated with Robert Bloch’s new novel, Psycho, based on the Serial Killer Ed Gein.

The studio, Paramount, decides they don’t want to back this particular project. So, Hitch puts himself out, putting up the funding himself in turn for a higher return on the gross. The drama begins as tensions run high between Hitch and his wife, as he casts Janet Leigh (Scarlett Johanson) as the female lead.

The film paints Hitchcock as a man obsessed with his projects, as well as his infamous “Hitchcock” Blondes, but the tension on Hitchcock’s relationship with Alma feels a bit forced. Gervasi has Hitchcock haunted by the stress in his life, which is personified by the visions/voices of Ed Gein. The use of Ed Gein in this almost schizophrenic way was a bit goofy, because it starts early in the movie. Perhaps if the stress had crescendo’d to seeing these visions, and hearing the voices, it wouldn’t have come off as silly. 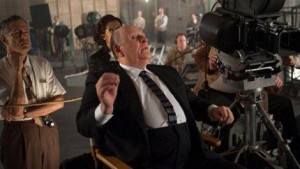 I will say the what left me the most disappointed was the portrayal of the filming of “the” shower scene. One of the most iconic scenes in the history of the medium is reduced down to a short 4 minute scene that ends with a psychotic episode by Hitchcock. The director was known for his grueling style, his particular planning, and attention to detail. The shower scene was shot with an insane amount of camera angles, and took over a week to film. I wasn’t looking for a behind the scenes exposé, but was definitely hoping they’d delve a bit deeper into this part of the story. What better way to show his obsession than through his unrelenting search for perfection? Nope, the film completely skips this. 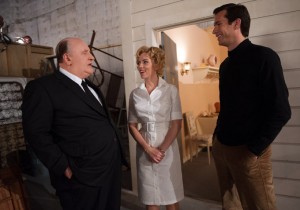 It’s these flaws that ultimately hurt the experience for me. Otherwise, all the actors in the film, even Hopkins (despite my reservations), were excellent. Hopkins’ Hitchcock was most certainly inspired by the character we came to know on programs like Alfred Hitchcock Presents. While, I can’t speak to whether or not that was a realistic portrayal, I definitely felt that Hopkins’ was accurately over the top.

Despite some major flaws, the film captures the charm and wonder that surround Alfred Hitchcock. There are some great nods to his style littered throughout. Through production design, score, and style, Hitchcock’s presence is felt throughout. The Hitchcock fan in me couldn’t help but smile, especially as some of the lore that we’ve only read about on IMDB Trivia pages and biographies on Hitchcock play out on the screen.

Hitchcock wasn’t an awful film, and perhaps I’m being a bit harsh because of the importance of the films subject. The film gets quite a few things right, and just as many if not more things wrong. At the end of the day, this tribute sadly doesn’t live up to its subjects name.