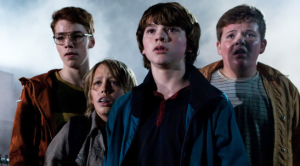 With J.J. Abrams as the hot topic of the moment, I thought that Super 8 would be a good choice for this week’s pick of the week. It was my most anticipated Summer movie of 2011, and though I was a little disappointed, it definitely captured a bit  magic of the Spielberg/Amblin films of the 80s.

The film tells the story of a group of friends who are working on Super 8 film together, who happen to be at the wrong place at the wrong time. A train derails, and so begins the mystery that plagues this small US town. The kids in the film are excellent, because in a world filled with unrealistic child characters, the movie calls back to classics like The Goonies in their portrayal of “real” kids.

Read the full review here, and add the film to your queue over at Netflix.com!

Also, unrelated side plug, did you listen to the first LonelyReviewer show podcast? What a great thing to end your week with!