PAX East is an amazing yearly convention that focuses on the amazing community of games: tabletop, PC, and of course all varieties of electronic gaming. PAX (Penny Arcade Expo) started as a smaller convention in Seattle before expanding to the East coast four years ago, and more recently to Australia. The convention continues to grow, and, considering how packed the fairly new Boston Convention Center was during PAX East 2013, one wonders how they’ll deal with expansion in the coming years; regardless, PAX is its still an amazing event.

Since we’re at the end of this console generation, the showing of major triple-A games was definitely smaller – but, where the larger games were lacking, the indie games flourished..

One of the standouts was “Contrast,” a fascinating game with an incredible art style. The game comes from the small independent company Compulsion Games, and is a platformer that mixes 3D and 2D perspectives.

Another standout indie game for me was Mercenary Kings, a 2D side-scrolling shooter that brings side-scrollers like Contra and brings them to today’s generation. From the team that brought us Scott Pilgrim Vs the World, this game pairs an awesome 8-bit inspired art style with modern mechanics. Check out their Kickstarter page here.

Guncraft combines the look and world-building aspects of Minecraft with a first-person shooter; it was fast, fun, and had a lot of charm. The game is currently in Open Beta, as well as on Project Greenlight. Definitely worth a closer look – check them out here. 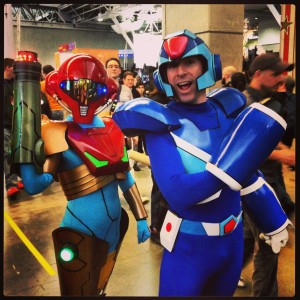 I played quite a few mobile games and I particularly enjoyed PWN: Combat Hacking created by a team from Massachusetts, as well as well as Major Magnet – both games are available now in the App Store. Breach & Clear, a game from former Infinity Ward Creative Strategist Robert Bowling was a very fun, complex tactical turn-based strategy game – I’m definitely looking forward to it’s release.

For me, the biggest game of the show was “The Last of Us,” a Playstation 3 exclusive. I can’t say I’m huge into the zombie games, but, one has to admire how far Naughty Dog pushed the limits of the PS3 and video game storytelling with this game. Last Of Us comes out in June.

All in all, PAX East keeps getting better; if only I had enough time to play everything.