The film tells the story of Candy (Hudgens), Brit (Benson), Cotty (Korine), and Faith (Gomez) – a group of college girls who have been friends since kindergarden. Faith is introduced to the audience while attending Bible study; the other three girls are introduced in association with drug and alcohol use. Though the girls are on different paths, their history keeps them together.

The four plan to go to Florida during Spring Break, a trip that they expect will completely change the course of 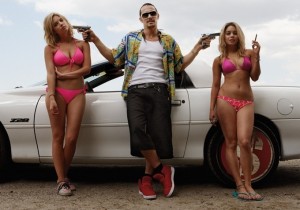 their lives. The four pool their money and realize they don’t have enough. Not wanting to be the only ones left on campus during Spring Break, missing out on a definitive experience, Candy, Brit, and Cotty rob a restaurant to get the money they need. The gang then heads to St. Petersburg, Florida (St. Pete’s, as it’s called in the film), and join the thousands of college kids that descend upon the city annually for the consumption of drugs and alcohol. Ending up in the wrong place at the wrong time, the four girls are arrested, charged with a fine and sentenced to a
short stint in jail. Along comes “Alien,” (James Franco), a local “gangster,” rapper, and all-around shady guy, to bail the group out. Alien then leads the girls deeper into the rabbit hole of vice and crime.

The girls become obsessed with their new-found love of criminal behavior, fueled by over-indulging in drugs and alcohol; Faith, however, who previously never wanted Spring Break to end, believes it’s time to return to reality.

The movie is edited together as an unsettled series of moments – scenes and lines of dialogue are repeated over and over, and the film moves backward and forward through the story, changing direction quickly. The tone is somewhere between dream and nightmare and definitely fits the girls’ tragectory through the story.

The dialogue is certainly not Shakespeare, but I believe that was Korine’s point: here’s a group of girls with absolutely no world-view, their speech that of stereotypical college party girls who haven’t comprehended the depth and consequences of their dangerous behavior. 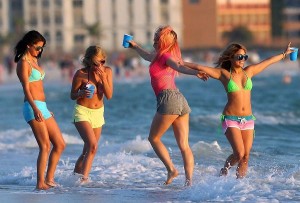