The 11th Annual Independent Film Festival of Boston kicked off last night at the Somerville Theatre in Davis Square. 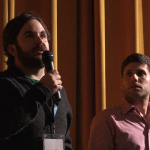 Festival Director Adam Roffman introduced the fests new Creative Advisor Casey Affleck to a packed audience. The opening night film of the festival was “The Spectacular Now,” (Read our Review Here). Director James Pondolt, and co-writer Michael Weber stuck around for a Q&A following the screening of the film.

There are six more days left of IFFBoston, starting up again with a free screening of “Before You Know It” at UMASS Boston. We’ll see you there!