One filmmaker stands against a world in turmoil, fighting a power that nods disapprovingly in his direction.  He fights for three things: explosions, Miami and bikini clad girls.  That’s right, Michael Bay is back and this time he’s not messing around with battling robots or Shia LaBeouf.  “Pain & Gain” promises muscles and sweat but might be just as empty as its characters’ heads.

Bodybuilder Daniel Lugo (Mark Wahlberg) is the head trainer at a gym in Miami.  Despite a strong and patriotic belief in the American dream, Lugo is having trouble finding success.  His job provides him plenty of opportunity to work on his physique but is lacking when it comes to financial stability.  With overdue bills piling up, Lugo attends a Tony Robbins-esque seminar in a quest for direction.  Lugo devises a plan to kidnap and extort a Victor Kershaw (Tony Shalhoub), a wealthy new gym client.  He enlists the help of fellow bodybuilder Adrian Doorbal (Anthony Mackie) and ex-con Paul Doyle (Dwayne Johnson).  Unfortunately, Lugo’s hubris ends up being larger than his muscles and the trio finds that sometimes crime can be really hard.

First off, it is nice to have Michael Bay on a film that doesn’t involve transforming cars from outer space.  Before Transformers took over all of Bay’s time he produced pretty entertaining movies.  Except for “The Island”…yeah, you’re right, the best part of “Bad Boys II” was the jokes in “Hot Fuzz”…ok, bringing up “Pearl Harbor” just feels like a low blow.  But come on, this is the guy that made “Bad Boys”.  Hell, “The Rock” and “Armageddon” both got Criterion releases, so that has to mean something.  The things that Bay does best are explosions, action and the occasional humorous and slightly inappropriate quip.  This is what made him seem like such an obvious choice for the Transformers franchise, things just got a little out of hand and, to be honest, kind of racist.  But, “Pain & Gain” seems like a return to the old Bay days.  The budget is right around $20 million, a number that Bay hasn’t been constrained to since “Bad Boys”.  Additionally, all of the action takes place in Miami, a locale in which Bay has previously been very comfortable.  Unfortunately, he has been gone for a long time. 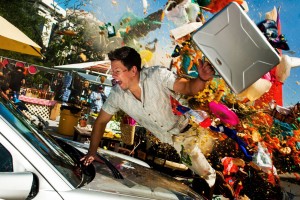 “Pain & Gain” starts off fine.  As I’ve said before, Bay does action well.  The initial chase and police raid has a frenetic energy that jumpstarts the film.  The Miami sun bathes every shot and accentuates the bright scenery.  This first set piece does lean on the slow motion shot a little heavily, to a point that I thought I was watching a Zack Snyder film.  The film also really wants you to believe that it is based on a true story, mentioning it not once, but twice.  I’m sure that there are some actual events that occurred, it was based on Miami New Times feature, but we’re not children here.  This is a movie, and when you tell me it’s based on a true story, I know to take that with a grain of salt.  The second time it is brought up comes off as a plea from the filmmakers to really believe what they’re telling us, and it is just a bit much.

The first half of the film moves briskly, which is impressive since there is very little action and no explosions.  Bay does his part by shooting everything with his ever moving camera.  He treats a hotel conference room like a villain’s lair, with sweeping movement around Ken Jeong’s Johnny Wu.  The camerawork helps, but the real credit goes to the actors.  Wahlberg sells the high aspirations of Daniel Lugo.  He has great dreams and not nearly enough brains to achieve them, something that is never aware of.  I had no problem believing that this guy existed.  Dwayne Johnson…guys, is it cool if I just call him The Rock?  Doesn’t matter, I’m doing it…The Rock is great.  His character is utterly ridiculous and so much fun to watch.  The guy is 300 pounds of rippling muscle and manages to convey the vulnerability of a Yorkshire terrier.  Sure he will flip in an instant and knock a guy on his ass, but I had no problem with that. 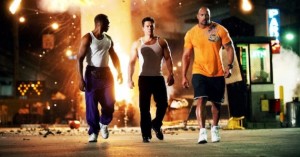 Funny enough, it was after the first and only explosion (how there is only one explosion is mind-boggling) that the film just starts to lose steam.  All of the characters begin to move to different places and the brakes just get slammed on the momentum that was built up.  Not much happens and the audience is left to play a waiting game.  See, the beginning of the film shows you where this is going, so now we are left to wonder how we get there.  It plods along with boring and unnecessary scenes coming one after the other.  In addition, The Rock’s Doyle becomes an entirely different person, eliminating anything that was appealing about him and falling apart into a pile of muscles.  New characters are introduced out of necessity and by the end of the film everything resolves extremely quickly, as if one of the writers awoke to realize that they forgot to get to the point.

It has been eight years since Michael Bay last made a film that did not involve a childhood toy.  His return to Miami to work on a smaller scale is a welcomed change of pace.  Bay is able to make entertaining films in a style that holds your attention firmly.  “Pain & Gain” starts off like the Bay we remember fondly.  The sunshine bleeds into the theater and Bay makes even the mundane engaging.  The characters are charismatic and the actors’ portrayals are fun to watch.  Around the film’s midpoint, things go wrong.  It hits a wall.   Characters become bores and scenes stumble along.  Focus is placed on unnecessary things while all of the fun of the first half is forgotten.  “Pain & Gain” gives us a hint of the Bay we wanted, but wanders off to get lost in tedium.  For a film about fitness, it has entirely too much fat.