In the past few years, the feeling of excitement and wonderment I’d once gotten out of big-budget summer tentpoles has been missing; I assumed I’d outgrown it. But with the latest entry in the “Star Trek” franchise, J.J. Abrams has brought that anticipation back to the summer movie line-up. With “Star Trek: Into Darkness,” Abrams shows us that not only can he build a masterfully crafted sci-fi action adventure, he can make a damn good movie around it.

I’m going to attempt to review “Star Trek: Into Darkness” without spoiling any integral parts of the story; however, it is impossible to discuss the film without giving away some light plot details – if the above paragraph intrigues you, please don’t read the rest of this – just go see the movie. 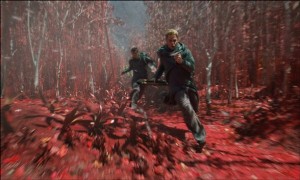 The entire cast of 2009’s “Star Trek” reboot is back for this installment, and we join the crew on a planet inhabited by a primitive race. A nearby volcano is about to erupt, and it will destroy the indigenous people when it does. In an attempt to stop this natural disaster, Spock (Zachary Quinto) is lowered into the volcano by Sulu (John Cho) and Uhura (Zoe Saldana), while Kirk and Bones (Chris Pine and Karl Urban) distract the natives. Remember the opening of 2009’s film? This opening brings you even closer to the edge of your seat.

This mission, well-intentioned but not authorized by Starfleet, lands Kirk in trouble, and he is relieved of his captaincy on the Enterprise. Meanwhile, rouge Starfleet agent John Harrison orchestrates an attack on a Starfleet facility. In the wake of more danger, destruction, and other spoilers, Kirk reclaims the Enterprise to hunt down Harrison.

The writing trio of Kurtzman, Orci, and Lindelof do a fantastic job spinning a story that carries the core themes of morality, humanity, and death through the film from start to finish. I applaud the filmmakers for taking some of the Star Trek cannon’s biggest stories and re-imagining them for a new universe. Restarting the universe in the way Abrams did in 2009 legitimizes the decisions they make: the characters are the same, but the challenges, enemies, and drama of the original Trek stories are taken apart and rebuilt into something new and exciting that still retains the heart of the original.

The visual effects in this film appear completely superior to most; the film relies heavily on CG for many effects but it fades into the background – nothing stands out as overly cheesy or poorly composited, a truly impressive feat. Composer Michael Giacchino once again assembles a fantastic score, expanding on the original theme to set a score that fits the new Trek.

I really enjoyed “Star Trek: Into Darkness,” and I think the film does the universe and its characters complete justice. While Abrams taking over Star Wars might put the third film in this new series in jeopardy, it doesn’t take away from how good “Into Darkness” is. Beam yourself over to your nearest IMAX cinema and strap in for a spectacular ride.

One thought on “Film Review: Star Trek Into Darkness”