Guys, it’s here.  Seriously, right there on the internets, the thing that was taken away from us well before we were able to become intimate.  When it left, we solemnly wrote “Do Not Eat” on its paper bag as we placed it in the freezer.  We held onto the hope that a return would be approved, but I think most of us quietly accepted the loss.  Then the unthinkable happened; Netflix rolled up like Jake Ryan just to let us know that he hadn’t forgotten our birthday…I mean the show we like (this reference worked a lot better in my head).  Cut to: Sunday morning, “Arrested Development” returned.

The days leading up to the release of the new season saw ubiquitous warnings.  All you had to do was Something “Arrested Development” and you would be hit with plenty of news articles on the fourth season.  A story of actors filming scenes separately and being put together via green screen was especially popular.  In addition, Mitch Hurwitz, in what felt like a gesture to calm the rabid fan base, urged people not to marathon the season when it finally arrived.  I get it Mitch; I know that you think your show should be enjoyed over an extended period, that we should let the jokes really soak in, but no thank you sir.  Over the course of three days I sat down and like a seal in a yellow bow tie devoured all fifteen episodes.

This season is unlike any other season of television that I have ever watched.  “Arrested” always did its own thing.  Its fly-on-the-wall way of shooting flirted with documentary, while never crossing into the mockumentary style that “The Office” would popularize.  It was a show tailor-made for repeat viewing on DVD, and now streaming.  Finding all of the jokes contained within the first three seasons is like embarking on an Easter Egg (her?) quest; a hunt will take less than an hour, while a quest will require supplies, perseverance and a flexible end date.  It even used the directing team of Anthony and Joe Russo before it was cool.  The show accomplished all this while airing on network television, and the fickle Fox at that.  The move to Netflix offered the writers more freedom, and they have decided to exercise that fully.

The complexity of this season is a marvel.  Each episode builds on the others, and keeping tracking of all of the intermingling storylines requires an attentive mind.  Twitter was awash with claims of the season being the “Primer” of television shows, which is an acceptable analogy, although I still don’t fully understand that film (Shane Carruth you beautiful bastard); a more fitting analogy may be to the film “Go” which employed a similar retelling of the story from numerous points of view.  Still, all of these comparisons feel incomplete since this creature seems to bock at your conventional definitions. 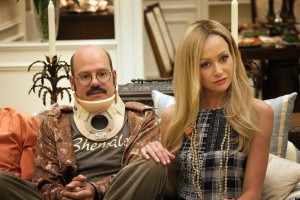 The first few episodes start slowly.  There is an initial excitement just to have the show back, but as that wears off you are left to wonder where the show is taking this.  The first episode is fine, but there is a great amount of table setting going on.  All of the jokes will not reveal themselves until the season comes to a close, but that makes the rewatchability factor skyrocket (having rewatched the first episode, I can personally attest to this).  The fifteen episodes worked a bit like a rollercoaster for me.  There is a build up to a point where the show seems to be really in its groove, probably around the first Tobias episode, followed by a bit of a lull; finally the last five episodes come in with a quality that will dare you not to take a break.  Nearly every set up is paid off and it becomes a game of keeping track of all the fantastic jokes that have just been simmering in the “Arrested” crock pot.  While there is some disappointment in the beginning, all I can tell you is that it gets better.  Many television seasons start off slowly, but with “Arrested Development” season four it is certainly a case of the tortoise beating the hare.

The green screen issue that was reported does exist.  I first noticed it in the second episode, in a scene involving Barry Zuckerkorn dressed as a sea captain, and it is off-putting.  Every instance of it is slightly jarring and a little disappointing.  But did you see the words I used there?  Slightly and a little.  If you can’t get over it, you probably have some other issues.  In addition, it seemed that I was looking at the backs of heads more often than previous seasons and jaw movements didn’t always match up with the words I was hearing.  I wonder if, like previous seasons, this was due to new lines being deemed funnier and added in post or if it was just a victim of poor editing.  The episode quality does dip at times, I’m looking mostly at the George Sr. storylines that never clicked for me, but the high points outshine the lows.  Tobias will likely be hailed as the star of this season, although his presence wanes as you approach the end.  Much to my chagrin, Buster is left out of much of the proceedings.  He doesn’t factor into many of the stories and only gets one episode to really let loose.  The little of Buster that you get is expectedly fantastic, I just wanted more.  To gripe about these issues seems petty.  The season is successful and only builds on the sterling reputation of “Arrested Development”. 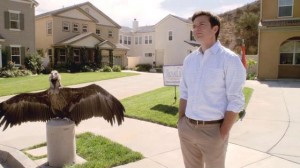 The new season of “Arrested Development” has a lot to live up to.  The show’s first three seasons were hailed as some of the best television ever and the fan base was one of the most devoted this side of Joss Whedon.  The fourth season’s existence still seems like a trick…er…illusion.  “Arrested Development” has returned from the dead with bigger plans than we expected.  The fourth season is denser with jokes than any television season I have ever watched.  While some shows allow you to have a drifting focus, this season demands your attention.  The less attentive you are, the less fun you will have.  This season in particular is designed to be savored over multiple viewings and I expect it to age just as well if not better than episodes that have come before.  It may not be perfect, but the fourth season of “Arrested Development” is everything we could want and probably more than we deserve.  So now Netflix, how about season five?