The nine-to-five been getting you down?  Feeling a little too domestic?  Foreign Friday is here to add that touch of the international to your week.  Our trips so far have been a bit dramatic; some sci-fi here, a little action, maybe something depressing and dark.  This week we have lightened things up.  So come along as we take a visit to South Korea for the coming-of-age film “Punch”.

Wan-deuk (Ah In Yoo) does not have a typical family.  His father, Gak-seol (Su-young Park), is a tap-dancing hunchback clown at the local cabaret and his “uncle”, Min-goo (Yeong-jae Kim) is also a dancing clown.  The local cabaret comes on hard times and is forced to shut its doors, forcing the two to take to the local market in order to make ends meet.  While his family is out trying to make a living, Wan-deuk is left to himself.  Through the help of his brash teacher and neighbor Dong-joo (Yun-seok Kim), Wan-deuk does his best to find his way through life. 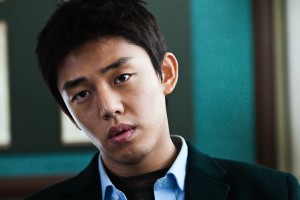 I am going to be upfront about this, I’m a sucker for a good coming-of-age story.  There is something about growing up on the big screen that just works.  Pop in “Stand by Me” and you have me glued for the entire runtime.  Hell, it’s probably part of the reason I so fully enjoyed “Mud”.  Whether or not the gender matches up (even a dude can like “Now and Then”), a film that chronicles the experience of finding oneself and the path to becoming who you will be is a topic that feels perfectly catered to the cinema.  “Punch” inhabits a world that you may not be familiar with, but the concepts and people are universal. 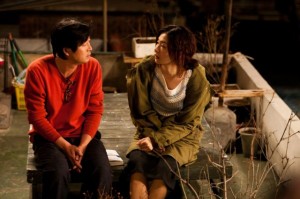 The film starts slow.  As each minute ticked by, my sense of dread steadily rose.  A strong focus is placed on the cabaret and Wan-deuk’s father.  The cabaret feels cliché and the father is obtrusively dismissive of a son that is nothing but supportive.  The obtuse interactions are out of place and, even with the little we know of these characters, they read as fake.  Wan-deuk is not particularly likeable, or anything-able for that matter, he just exists.  Around thirty minutes the film starts to emerge from its cocoon.  Apparently a table was just being set and now we start to get some food on our plates.  It’s not that we are supposed to graft ourselves onto Wan-deuk, a potential reason for the character’s blandness, this is just how the world sees him.  As we are brought closer to Wan-deuk we see that he is not as unspectacular as he appears to be.  Like a calmly floating duck, just below the surface feet are churning away.

All coming-of-age stories are essentially about growing up.  You would expect that the teenager at the film’s center would do the lion’s share of growing, but that’s not so.  The supporting characters need to grow just as much, if not more than Wan-deuk.  While Wan-deuk has not blossomed yet due to an apparent fear of the world that surrounds him, many of the adults are stuck in a state of arrested development due to their stubborn nature.  Gak-seol so earnestly wants to continue his life as a dancing clown (I just wrote that without the hint of a chuckle, no lie) and forgets to be a father.  Dong-joo is perpetually pushing against the structures of society to be his own person.  All three of these men are resistant to establishing new connections, although Dong-joo to a lesser extent.  The film posits that a full life requires other people.  To be alone is to be incomplete, so in order to grow you must be willing to let others in.  As the ensemble grows closer you can see the people become happier and live more fully. 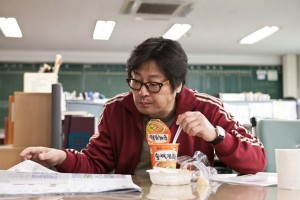 The film is at its best when it is exploring the growth of its central three men.  Yun-seok Kim’s Dong-joo is the father figure that is needed.  He is decidedly abrasive but not to the point of excess.  His harshness is obviously meant to help more than it hurts.  The scenes between Yun-seok and Ah In get better as the film progresses.  The two develop a strong rapport that is the backbone of the film.  At times the film attempts to explore the romantic and is less than successful.  In the case of Wan-deuk’s love interest it becomes too much too fast.  The relationship is less than organic.  Dong-joo’s love story is the stronger of the two, and nearly makes up for the other’s shortcomings.

No matter how much we may fight it, growing up is something that we all go through.  That’s why the coming-of-age film is so relatable.  “Punch” wears its label proudly.  The film’s heart is strong and the themes are communicated marvelously.  After a slow start, you develop an affection for the characters that propels the story along.  Bucking tradition, the story’s protagonist isn’t even the one that has the most growing to do.  A stubborn mindset abounds and a fight against the loneliness it creates is established as the path to happiness.  The film stutters at points, especially as it experiments in the romantic, but its sincerity is its ultimate savior.   Like any good coming-of-age film, “Punch” has a sweet heart.  If you don’t find yourself grinning by the time the credits roll you might have misplaced your soul.