There are few things as great as teenage summers. You are just old enough to dip your toe in freedom but still young enough to have a support structure behind you to cover all of the essentials. Unfortunately, this tends to be a realization that comes several years later. We get caught up in the complexities of our own lives and the tribulations of youth, no matter how retrospectively trivial. You fall deeply and passionately in love far too easily but completely sincerely. Your vision of events is much more dramatic and dire than they have any right to be. The Kings of Summer is able to fully embody this idea and still manages to enjoy all of the humor it possibly can.

Joe Toy (Nick Robinson) is far from happy with his home life. His single father is constantly on his case and Joe is being pushed to his breaking point. Joe’s best friend Patrick (Gabriel Basso) isn’t faring much better, literally getting hives from the struggle of living with his obtrusively square parents. Joe decides that the best way to remedy his situation is to introduce a massive change. After convincing Patrick and proving unable to shake oddball Biaggio (Moises Arias), the three flee their homes and set out to build a new place they can call their own to enjoy the freedom they believe they deserve.

I have not shied away from my love for coming of age films. To expound further on my admiration for the genre would be redundant. It shows no sign of fading but the ability to capture the magic that the classics have so beautifully harnessed is no mere feat. Then there is Kings of Summer; this is how you do a coming of age film. The subjects are at no times unfairly belittled. The teenaged characters are treated with the utmost respect. Children make decisions that children would make and are not shown to be exceptionally wise beyond their years. The characters are authentic. This is how teenagers think and act. The honesty of the characters as written allows for a complete and absolutely fulfilling connection to the film. There is a wide range of humor displayed that will satisfy all viewers. It’s one thing to do smart comedy, but to balance that with a mixture of the lower brow while at no time reducing the overall maturity of the film as a whole is another skill entirely.

The cast is a comedy fan’s wet dream. Including Nick Offerman, Megan Mullally, Alison Brie, Thomas Middleditch, and Mary Lynn Rajskub, not to mention a host of additional cameos; it is plucked from the angels that offer us laughter. Every member has their time to shine but none so brightly as Offerman. At first it appears that he is safely in his wheelhouse, serving up a fatherly version of Ron Swanson. However, as the film progresses the relationship between his character and that of Joe grows in depth and shows that Offerman is no one trick pony. Joe Toy is a character that could easily stumble into annoyance. Slightly self-entitled with a put-upon mentality that dares to get on your nerves, Nick Robinson sidesteps the inherent pitfalls and keeps the character utterly human. Gabriel Basso fills the best friend role like a glove and allows the audience to see a representation of the adolescent male friendship that hasn’t been done as well since Superbad. I haven’t even touched upon the scene-stealing power that is Moises Arias’s Biaggio. Quirky, off-center and just plain weird, Biaggio should devolve into caricature. Biaggio’s loyal honesty is a testament to the performance of Arias. The character is elevated past simple joke to heartwarming friend. Oh, and he is probably the funniest thing throughout the film. 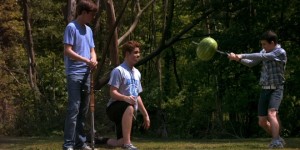 By all rights, this film should fall apart. Writer Chris Galletta’s script tackles enough themes to make your head spin. Love, loss, family, growing-up and friendship; if I had to name a few. Through Jordan Vogt-Roberts’s direction, focus is maintained with ease. He deftly juggles the myriad themes while maintaining the film’s heart and established sense of self. At no point does it seem like he has bitten off too much. All of the themes are fleshed out organically and do not overstay their welcome. Vogt-Roberts does all this while also capturing the beautiful scenery of wooded Ohio. His occasional over reliance on montages, feeling like a bit of a crutch, is overcome by his ability to turn the surroundings into another member of the cast. This is the only time a film has made me want to go exploring the unkempt side of suburban Ohio.

Each and every year the marketplace is flooded with films exploring adolescence. It has become increasingly difficult for a film to set itself apart from the dregs of redundancy. The Kings of Summer has no such trouble. The film’s strength of heart astounds. Capturing an honesty in its depiction of post-pubescent dysfunction and discovery, it explores an exorbitant amount of themes without feeling overcrowded. Across the board performances by an able bodied cast impress. The strange Biaggio, and his portrayal by Moises Arias, is the film’s awkward spirit animal and will likely be the favorite of its audiences. Under the watchful eye of first time director Jordan Vogt-Roberts, it proudly joins the ranks of the best coming of age films. The Kings of Summer is a lovingly made film that will touch your heart and make your sides hurt with laughter.