The film trilogy, you fickle beast you.  Many franchises have attempted you, but few have mastered.  It’s that third piece that often eludes the filmmaker; a final piece of the puzzle that can be ill-fitting.  You are a host to a denizen of direct-to-DVD installments and threequels that threaten to demolish the reputation established by the prior films.  You even took down the Oscar darling and seemingly bulletproof The Godfather, and we loved that one.  Now the Before series tempts fate in its exploration of the third installment.  Luckily, Before Midnight has the chops to defeat the three-headed monster.

Jesse (Ethan Hawke) and Celine (Julie Delpy) have spent the summer in Greece.  It is nine years after the events of Before Sunset and the two are still together.  Now with twin daughters, their lives are quite different than when we last saw them.  Jesse is dealing with a drifting relationship with his son created by geographical distance and an ex-wife that is less than quiet about her distaste for him.  Celine is at a career crossroads and is facing a decision that could result in changes for the entire family.  A Greek couple gifts the two a night in a hotel away from the stresses of family, and they spend the evening exploring the intricacies of their relationship.

Before Sunrise and Before Sunset are both films about individuals at specific points in their lives.  Before Sunrise is about the early 20s and the journey into the person that you will become.  Its characters are not yet disillusioned by the world and can see ways that they will be able to contribute to it.  Love is still a romantic concept that they are unsure if they have even fully experienced at this point.  Before Sunset finds individuals in their 30s.  With expectations of accomplishment, time has weighed on Jesse and Celine and they are more 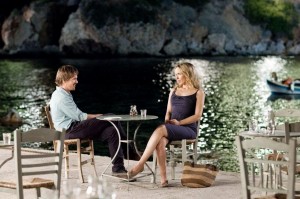 the people they will always be.  Love is less romantic yet somehow just as mysterious as its characters reach out for it.  Before Midnight continues the tradition with the most mature entry in the franchise.  An exploration of the truth of adulthood and the distance that can exist between romantic love and love for family, it is one of the most stripped down and true to life representations put to film.

At this point, Jesse and Celine have known each other for 18 years and have been exclusive for nine.  While the first two films were strongly focused on only Jesse and Celine, this film smartly introduces the intrusion of life and the many others that are now involved.  They have had their twin daughters for a great majority of their nine years together and Jesse’s son, who we heard about in Before Sunset, is nearly in high school.  Gone is the tension of whether these two will get together, replaced with a worry that they will stay together.  It’s not that their relationship is on the rocks, only that life makes everything complicated.  This is a romantic comedy in the truest sense of the term.  Genuinely funny moments naturally germinate but there is no fantastic element that the two must overcome for their love to flourish; they only need navigate the terrain of continuing love.  We are looking for what romance is and the film strongly poses this question without providing a concrete answer.  It is a question that may very well not have an answer but in its conversation may provide all the resolution we can hope for.  The film taps into the insecure concern that you will not have what it takes to make even the best of things work out and exploits it expertly. 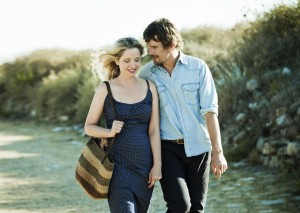 Ethan Hawke and Julie Delpy are so intimately aware of these characters at this point that they are able to cross past acting into some odd realm of the real.  The dialogue is naturalistic and insightful.  The screenplay, written by Hawke, Delpy and director Richard Linklater, avoids the gentle pretension of the first installment and is instantly accessible and thought provoking.  This is not a film that you can watch casually; it demands your attention for the entirety of its runtime.  You will not be able to help yourself from connecting the film to your own life and exploring the very themes they so fully discuss.  The final 45 minutes of the film are completely engrossing.  As the two bicker, knowledge of each other is more than evident.  Each person knows just the right buttons to push in order to inflict the most harm.  Our intimacy with Jesse and Celine, developed over the course of the three films, makes the confrontations difficult to watch, tantamount to watching your parents fight.  The film works beautifully as a third part in a series, but its exploration of love is so honest that it has every right to exist on its own.

Love is a universal and frustratingly intangible concept.  While initially it is something that we merely desire it changes into something that we strive to keep.  Before Midnight is a film about love.  Gently utilizing a beautiful Grecian backdrop we are reintroduced to Jesse and Celine as adults.  Rather than an urge to obtain they now are attempting to maintain.  Ethan Hawke and Julie Delpy display a deep knowledge of these characters and portray them as fully developed people.  Linklater, who utilizes some impressive long takes, wonderfully captures the myriad conversation between the two in an unimposing and occasionally voyeuristic manner.  The film has so much to say, often offering little resolution but manages to still continually satisfy.  There are few films in recent memory that so truly encapsulate the trials and tribulations of a relationship as its inhabitants grow older.  Its foundation of true love is important but is not always enough to sustain.  Before Midnight is an exquisite continuation of the lives of Jesse and Celine.  It is the most adult entry, possibly the most complete and will create a conversation that continues well after the credits finish rolling.

One thought on “Film Review: Before Midnight”