We are a celebrity obsessed society. Aggressive paparazzi and TMZ are admittedly terrible things that exist in our world today, but they continue to remain profitable for a reason. We live in a time when children aspire to be famous, not for any reason in particular, but simply to have name recognition. Our focus on popularity regardless of relevant credentials is reaching a level of nauseating proportions. If we cannot have the fame we at least want to be fame-adjacent, getting high off of mere proximity. This sickness most readily infects the youth of society causing more than a few to fear for our future. The Bling Ring looks directly at a posse of these fame-obsessed adolescents but doesn’t manage to say anything new on the topic.

After being expelled from his last school for an abundance of absences, Marc (Israel Broussard) is transferred into a high school populated by high school rejects where education isn’t highly valued. He is quickly befriended by Rebecca (Katie Chang) who along with her friends cannot be bothered with the education system, finding any excuse to avoid studying. After experimenting in petty theft, Rebecca decides that she wants more. With Marc as her researcher, the two use the internet as an investigative tool and track the movements of their favorite celebrities. With knowledge of the celebrities’ penchant for frequent absences and less than secure households, Rebecca brings in her friends to relieve the famous of their belongings. 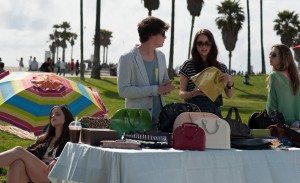 Robberies are inherently exciting. The thrill of being someplace that you shouldn’t, the possibility of being caught, the not knowing; all coalesce to get your adrenaline pumping. Not so fast says The Bling Ring. Despite the inherently stimulating nature of robbery (and that in no way is to promote robbery, because that sucks) the film’s depiction is often boring. Once we get to the nitty-gritty of stealing from Paris Hilton, it is as if the film simply gives up and decides to not explore any more interesting territory. Every pilfering that follows is more tired than the next. In fact, the film does little more than repeat itself for 45 minutes. When shit finally hits the fan and the force of law gets brought down on the group, it’s more of a relief than anything else. We get a respite from the cycle of stealing and partying and head out to explore some legal environments. Unfortunately, none of what follows is intriguing in the slightest. This is all fairly standard and uninspired.

Outside of the repetitious nature, the film seems unable to find itself. With no less than five members in the central ring, we are initially set up to follow Marc and Rebecca; however, as the film progresses it becomes less and less sure of itself, hopping from character to character without purpose. It’s not that the acting is bad, Katie Chang and Israel Broussard are fine, Emma Watson is better, it’s just that it all seems so muddled. The film is most assuredly not about these characters growing, they leave the film as they entered it. An examination of our obsession of celebrity would seem obvious although it never emerges. Quick shots of red carpet photos, feeling like a Google image dump, are inserted to potentially highlight celebrity, but add little. It may just be that this is a simple film about stupid people stealing from other stupid people, and that is a horribly missed opportunity. 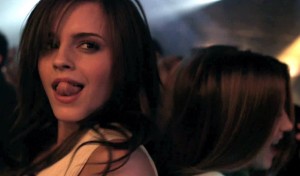 The film is vacuous and tepid but cinematographers Christopher Blauvelt and Harris Savides shoot it wonderfully. The best sequences lack any dialogue at all and are basically exceptionally captured music videos. It is easiest to connect with the characters when they just shut up. The opening title sequence is immediately captivating and draws you in, albeit only to serve up disappointment, but it draws you in nonetheless. Numerous scenes take place at a night club in which most is filled with juvenile banter on which celebrity is present for the evening; but when the music is turned up high enough to drown out their incessant ramblings director Sofia Coppola does more work to define the characters than all of the words in the script. The camera drinks in the utter delight and reckless abandon of our group. It’s at these points that we come to fully realize the simple nature of our focus. These are children that want to be seen having a good time as much as they want to have said time. The film would pair nicely with Coppola’s Marie Antoinette, partly due to the shared theme of celebrity, but mostly due to the beautiful visuals of little substance.

The trend of celebrity for celebrity’s sake is unfortunate. Instead of raising up individuals for achievements we instead hand out television shows to the deeply flawed and vain. We stare hopelessly as emotional train wrecks and shallow individuals mutate the very idea of entertainment. With the true story of spoiled teens that robbed the likes of Audrina Patridge and Lindsay Lohan, The Bling Ring doesn’t add much to the conversation. The film bores in its relentlessly repetitious display of the eponymous group’s antics. Scenes of theft are devoid of tension and grate as their frequency increases. Often feeling pointless, the focus casually floats only resting long enough to display the characters’ mundanity. Skirting any chance to contribute to the discussion of celebrity, it is like a confused child unsure of what it wants to say. The beautiful imagery and handy camerawork on display makes the film quite visually appealing but doesn’t do enough to save itself. Ultimately, The Bling Ring ends up just like the celebrities its characters celebrate, nice to look at on the outside but empty on the inside.

Stay up to date with all that Derek has to say on film and follow him on Twitter @DerekDeskins.

One thought on “Film Review: The Bling Ring”