Put on your reading glasses and get ready to get after some subtitles because it’s Foreign Friday. This may be the week to really test just how far you are willing to go for a film. Sometimes you just have to be willing to throw out any preconceived notions and let a film take you away as you hold on for dear life. Let’s just say, things are going to get a little weird. This week we return to France who provides us a decadent and surrealist journey with Holy Motors.

Laying out the plot of Holy Motors is an impossibly daunting task because by doing so you are implying that the film itself has a clear plot. But for you, dear reader, I will try. Oscar (Denis Lavant) steps into a limousine to begin his work day. His driver and confidant Céline (Édith Scob) provides him with light conversation and his first assignment of the day. It seems that Oscar’s job involves participating in a series of live action theater vignettes in which he becomes another person, a transition that involves elaborate costumes and makeup. Over the course of the day Oscar participates in several drastically different stories that leave you questioning which character is the real man while Céline and the limousine remain the only constants. 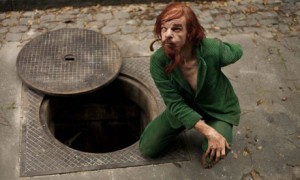 If you were unsure of what surrealism is, then you get it, am I right? But seriously, does anybody truly understand surrealism? I certainly don’t but it definitely is one of those you’ll-know-it-when-you-see-it things. If you have merely a passing knowledge of the surreal then you most assuredly have heard of Salvador Dali. He is the most easily recognizable and the melting clocks in his Persistence of Memory have become a near mascot for surrealism. However, Dali only dabbled in film and often only with Luis Buñuel who produced many memorable films as part of the surrealist movement. I will readily admit to being more confused by entries in the surrealist milieu more than anything else, but it is definitely art. Holy Motors director Leos Carax, however, seems to totally understand what surrealism is all about.

The film’s tonal shifts can be jarring. There has to be an assumption of what is performance and what is life in the film and I have to suppose that the moments captured inside the limousine are the closest to Oscar’s true self. As such, the moments within the limousine feel much more personal than any other sections of the film. You witness Oscar’s process as he applies the makeup and truly becomes another person. Perhaps Céline is the only person to really know the man and her relationship with him grows to feel sisterly. The two share an unspoken closeness communicated by glances through mirrors. The two never truly see one another as Oscar only ventures out of the car in character. 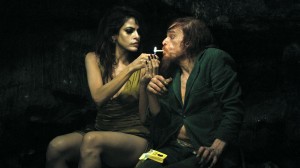 Denis Lavant delivers a performance that is a true tour de force. So little time is spent with each character with us rarely learning even their names, but Lavant is able to make each feel complete. Watching his snap transition as he exits the back of the limousine is mind boggling. Many of his characters do not even speak, but he is able to tell us all that we need to know through his performance. The man has immense talent but the success comes from his complete devotion to character. I don’t know that there are many actors that would perform a stylized sex act in a motion capture suit, portray a sewer dwelling vagrant and cold blooded murderer, least of all checking each box in the same film. Regardless of your enjoyment of the film his ability and the strength of his performance cannot be denied; it is remarkably brave and impressive.

Let’s not forget to praise the warped mind of Leos Carax. He infuses a distinctiveness into each piece that allows them to feel singular while maintaining some thematic through line. I wouldn’t want to remove any piece from the whole because they do in fact work best together. It is interesting that the pieces become direr as the film progresses. As the night stumbles along the sadness of the stories crescendos subtly. Flights of fancy are forced to face the struggles of real life with the theme of death becoming the loudest speaker. It is a testament to both his writing and direction that he is able to make seemingly individual 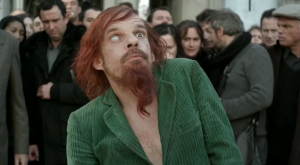 sections feel necessarily conjoined. He knows when to make the action frantic and when to slow it down and allows us to take our time in consuming the smaller moments. Your eyes will delight in the images that flood your screen whether or not you understand their purpose. The accordion interlude alone, which is marvelous and downright fun to watch, makes the entire ball of confusion worth the time. I would happily start every morning by simply watching this interlude. The film is ultimately confusing and I do not know that even repeat viewings will provide you with answers to its desired message, but the time you spend with the film will leave a lasting impression.

It’s sometimes nice to just sit back and enjoy a film that demands little from you. On the other hand, it can be really interesting to take in something more challenging. They can offer you a gateway to a style that you never thought you’d like and can leave your brain reeling. Holy Motors is by no means an easy film. It truly is a film that you do not watch but rather experience. Denis Lavant confidently strides onto the screen with a performance that will baffle your senses. He inhabits multiple characters so fully as to make you forget the man that drifts between them. Writer/director Leos Carax makes strong choices that result in a spectacle for the eyes. The film is admittedly hard to understand and is perhaps best enjoyed by not trying to find its root. Holy Motors is a beautifully confusing surreal film that challenges the very idea of its medium. Make it a fully surreal experience and preface it with an appetizer of Luis Buñuel’s Un chien andalou, although the combination will probably leave you feeling all weird inside.