Friday is a day we look forward to, if not only because it heralds the coming weekend then because it means a little international film; at least that’s how it is with Foreign Friday. Throw out those ugly notions of anti-artistry and subtitle negativity and embrace the cinematic offerings of the world. This week we merge some old with the new as we head to China for the martial arts action thriller Dragon.

Liu Jin-Xi (Donnie Yen) is your average father in a small early 20th century Chinese village. With a loving wife and two sons, his family is happy in its simplicity. One day, as Liu is shopping in the local general store two bandits enter with nefarious intentions. At first, Liu tries to hide from the scuffle, but when it reaches a point in which his conscience will no longer allow him to sit idly by, he forces himself in. In the ensuing fight Liu not only subdues the assailants but kills them both. Following the skirmish, detective Xu Bai-Jiu (Takeshi Kaneshiro) identifies one of the bandits as Yan Dongsheng (Yu Kang) one of the government’s ten most wanted fugitives. As his investigation continues, Xu begins to believe that there is more to Liu Jin-Xi than he lets on. 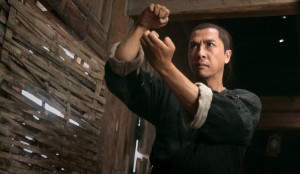 This film was a bit of a departure for me. I did not watch any trailers or read a plot description (in general, if Netflix offers a plot description I’d steer clear, they either spoil or completely mislead). I chose to watch this film almost entirely because of the presence of Donnie Yen. If you aren’t aware of Yen, it’s time to catch up. He is a martial artist and actor with a penchant for the classic. With Dragon we not only get Donnie Yen on screen, but behind it as well, serving as the film’s action director. The choreography on display is the film’s greatest strength. The fights are beautiful and often feel dancelike in their precision. The actors move with great speed and exacting detail. The best part is that all of the action is incredibly easy to follow. Many modern fight scenes rely on an ever moving camera and quick cuts that often make the scenes muddled and extremely difficult to understand. I know that people are punching and being kicked but your relentlessly confused editing and choreography leaves me unsure of who is doing said punching and kicking. So it is with relief that I celebrate the clarity of the film’s action; the fact that it is also excitingly delightful to view is an added bonus. It’s nice to be reminded of just how entrancing a classic martial arts fight scene can be. 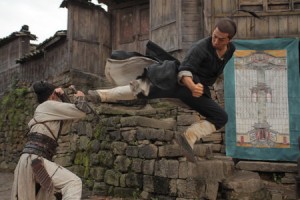 A lot of martial arts films lean really hard on the action and use the story as filler between the punches, luckily that isn’t the case here. The story is interesting although it may seem a bit too familiar. Its similarities to A History of Violence are a bit troubling and distracting. The films would make for a Venn diagram with a healthy middle section. The similarity does not seem intentional and Dragon’s story has enough differences to be unique, but the comparison leaves this film looking like the lesser. Of the two, Dragon plays with spiritual themes more readily. Qigong, the practice of developing and harnessing one’s qi, plays an overtly important part in the story. The fantastic nature of its use accounts for many of the film’s superhuman attributes but does begin to grate in its over-explanation. I do not discount its importance, only that the filmmakers have chosen to delve into its theory to the point of tedium and it grows to be a distraction. It’s as if we were to delve deeply into the intricacies of Superman’s powers; it is an unnecessary and arduous task that struggles to yield worthwhile fruit.

The film crescendos as it progresses. It begins quietly as a simple domestic tale of happiness, but quickly grows with the introduction of Takeshi Kaneshiro’s detective Xu. The character is interestingly complex and rarely completely likable. We have no reason to distrust Liu but it is Xu’s job to cast an inquisitive eye on what everything appears to be. His deconstruction of the crime scenes coherently bounces between the present and 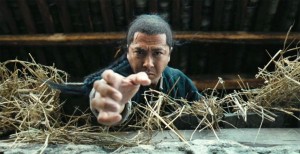 recreation allowing us to witness his process. The investigations do feel like a calmer version of Agent Smecker’s in The Boondock Saints, but the reduction in absurdity results in a more contemplative tone. The film’s main story may be Liu’s but Xu provides the heart until Liu can catch up by the film’s conclusion. The backstory of Xu is developed subtly allowing the viewer to become more connected to the character. While the film often relies on shallow characters to fill the background, the leads are interestingly shaded without veering into absolutes.

It is far too easy to be dismissive of martial arts films. Occasionally decried as glorified feature length fights, the lesser fare that pays little attention to story structure let alone coherent choreography establishes the stigma that all others must endure. Dragon is much more than a simple scuffle. With a story that is old China by way of A History of Violence, it allows the action to flow rather than stutter. The battle of fisticuffs is the film’s crown jewel. Under the watchful eye of action director and star Donnie Yen, the choreography is seamless and effortlessly captivating. The stylistic flourishes overcome the occasionally slogging emphasis on spiritual elements. Dragon is a thrilling film that reestablishes the art in martial art.