“The Heat,” written by “Parks & Recreation” scribe Katie Dippold, and directed by “Bridesmaids” helmer Paul Feig, is a new “buddy cop” movie that updates the genre; I can’t think of a single other buddy cop movie that features two females in the principal roles. Both Sandra Bullock and Melissa McCarthy bring strong comic timing, great physical comedy, and excellent chemistry, all of which prevent the film from being white noise in the sea of buddy cop tropes.

The film opens with FBI Special Agent Sarah Ashburn leading a team of FBI agents on a raid for drugs and illegal firearms in a suspect’s home. The team turns up with nothing, but Ashburn, in showboating fashion, reveals the evidence the team couldn’t find. While successful, her rampant perfectionism drives her colleagues away, and no one wants to work with her. When a promotion becomes available, Ashburn’s supervisor brings up his concerns about her taking the position, and asks her to head up to Boston to oversee an investigation into a drug ring as a way to prove she can work with others. 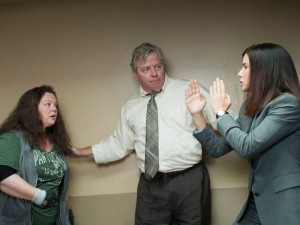 Detective Shannon Mullins, much like Ashburn, is also difficult to work with. We’re introduced to her as she uses unorthodox (and agressive) methods to stop a transaction between a john and a prostitute, before she chases down a drug dealer. Immediately, Ashburn and Mullins are at odds. Ashburn, who attempts to pull the jurisdiction card, has no interest in working with a local detective, and Mullins sees Ashburn as a sad individual, hobbled by rules and the “right” way to do things. What kind of buddy cop movie would it be if the protagonists didn’t have completely different viewpoints on how to serve justice?

“The Heat” rips pages right out of films like “Lethal Weapon” – with two total strangers thrust into a partnership – and while the crime story and even the relationship arc is not new, Bullock and McCarthy bring a uniqueness that takes this film to a different level. The pair are excellent comic actors, and have a hilarious rapport between them. 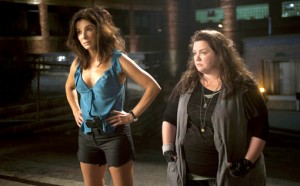 I really appreciate Feig’s work and, between this and “Bridesmaids,” he keeps bringing well-written films with strong female characters to the mass market. It’s great to see films like “The Heat” succeed at the box office, because it shows that studios don’t need to avoid films they may have previously seen as a risk. With a $40+ million dollar take this past weekend (not to mention knocking “Man of Steel” out of the top spot), I definitely see a “Heat 2” on the horizon.